The Enerpac HSL1507 strand jacks support and lift the pendant-type scaffolding system called Skyffolding (Platform-supported Boiler in-Furnace Scaffolding and Lifting System), which the company says provides a safer working environment than traditional scaffolding for this type of use.

Typically, 70m high, the height varies according to boiler size of thermal power plant. Traditional scaffolding, with its stacked structure constructed from bottom to top, with the total load on the base has the potential to cause problems. In the event the lower levels of scaffolding are damaged it may trigger a complete collapse with potentially disastrous consequences.

In an effort to reduce this risk of collapse, Kles developed the Skyffolding system, a new approach that reverses the order of scaffolding construction from top to bottom. 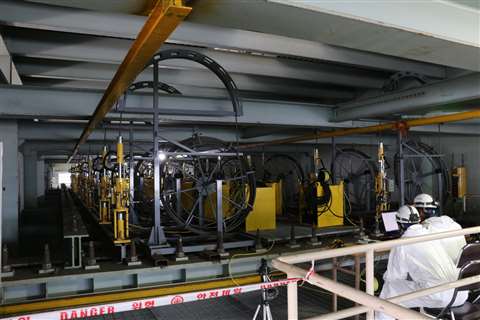 The Skyffolding lifting system involves the installation of a network of typically 20 Enerpac strand jacks onto a heavy girder at the top of the boiler. The strand jack wires are lowered and connected to uphold and lift a support platform, the uppermost support frame of the scaffold system. Robust wire ropes connected to the support frame are used to support pendant scaffold platforms attached beneath at 2m intervals, which are repetitively jacked up using the lifting system.

Each pendant platform features an integral staircase allowing easy movement between each level. This allows the synchronised strand jacks to hold and lift the entire scaffolding as a single unit.

The synchronized Skyffolding system is able to reliably and safely lift the scaffolds with an even load dispersion, keeping deviations in lateral and vertical directions to a minimum. As an additional safety measure, special fail-proof fasteners on the suspended platform have been designed such that the grip on the wire rope increases in direct proportion to the load applied as the scaffolding structure grows. In consequence, the stability of the entire scaffolding system is maintained even if structural problems occur at the lower levels, unlike a conventional scaffolding tower. 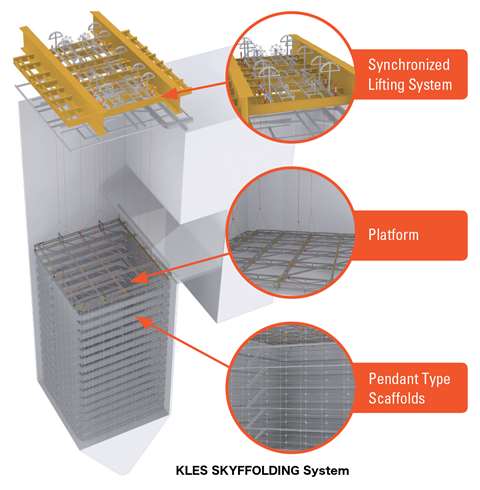 The 17 tonne capacity Enerpac HSL1507 strand jack acts like a linear winch. A bundle of steel cables or strands are guided through a hydraulic cylinder; above and below the cylinder are anchor systems with wedges that grip the strand bundle. By stroking the cylinder in and out while the grips are engaged in the anchors, a lifting or lowering movement is achieved.