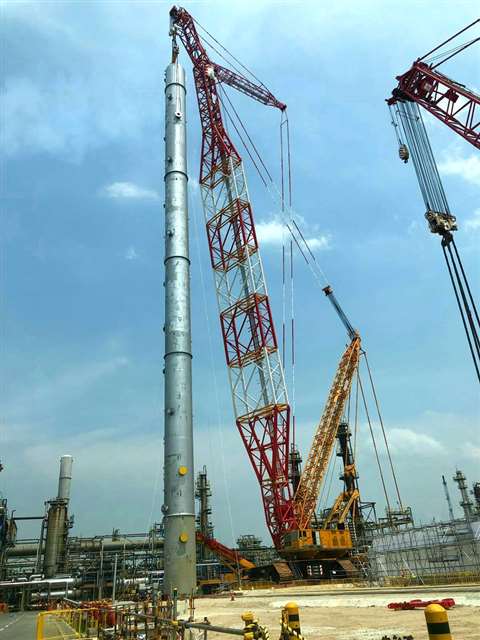 As one of the world’s largest cranes there aren’t many jobs out of the reach of a Demag CC 8800-1 lattice boom crawler crane.

Singaporean lifting and transport specialist Tiong Woon had to go beyond the standard configuration for a recent refinery job. To lift a 100 metre, 510 tonne C3 splitter column the 1,600 tonne capacity crawler was fitted with a Boom Booster capacity enhancement kit.

The job was a tandem lift together with a 600 tonne capacity Demag CC 2800-1 lattice boom crawler, a smaller sibling of the CC 8800-1, for tailing duty.

Local codes of practice meant that a test lift was carried out away from the actual work site. Having passed this test the crane was dismantled, loaded onto trucks and driven to the Merlimau Road work site. It took five days to set up the crane with its seven-part Boom Booster kit. That is one day longer than for the standard crane. The team consisted of six assembly technicians, six signal people, and two supervisors.

Commenting on the job, Michael Ang, Tiong Woon deputy chief executive officer, said, “To speed up the process, one part of the team took care of assembling the base crane, while the other part took care of setting up the Boom Booster.” In addition to an experienced team, the crane is well designed and there was an unusually large amount of available space for assembly, Ang explained.

Upending the 100 metre by 4.84 metre column was the biggest challenge on this job. First, the CC 2800-1 picked up one end of the column and lifted it 500 mm. At the same time, the CC 8800-1 lifted the other end and the tailing crane tracked forward until the column was hanging vertically and the CC 8800-1 was taking the entire load. The tailing crane was released from the load and the larger unit moved the column into its final position and set it down in position.

“Tandem lifts are already complex operations in and of themselves, but when you add a heavy load with this type of dimensions, things get even trickier,” Michael Ang explained. It explains the importance of meticulous planning. Completion was a few days ahead of schedule.

“We were at the work site for a total of 69 days with our cranes and 25 people on average. The fact that the weather conditions were ideal and, especially, that the two Demag cranes have such incredible performance characteristics, played a crucial role in enabling us to finish the project earlier than planned – this goes particularly for the CC 8800-1 with the Boom Booster, which was an absolute requirement in order to be able to lift a load with these dimensions and this weight,” Ang said.