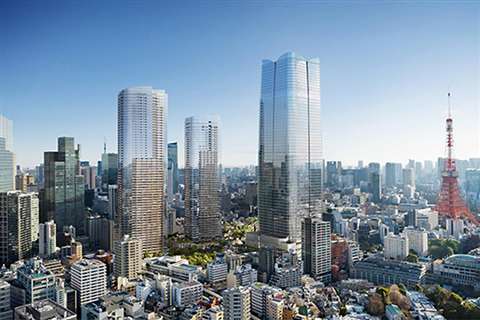 Privately owned Japanese building firm Mori Building Co has begun work on a real estate development project worth around JPY 580 billion (US$5.4 billion), near the Roppongi district in central Tokyo.

The Toranomon-Azabudai project aims to create a city within a city, with three high-rise towers catering for around 20,000 office workers and residential areas for a further 3,500 people, allotment areas, museums and galleries.

According to the chief executive of Mori, Shingo Tsuji, the development will also house a British School in Tokyo with around 700 students from over 50 countries, serving as an “engine” to help attract global companies and workers from abroad.

Tsuji said, “From all over the world we need to attract people, their business, their financial resources.

“Overseas expats have to be able to work, live, and learn. In the heart of Tokyo we need to offer that kind of environment,” he said, adding that about half of the office tenants would be foreign-affiliated companies.

The 64-floor main tower in the development is set to become the country’s tallest building, standing at 330m high. The complex will also host a luxury hotel brand debuting in Japan, along with a large-scale food market and a medical facility.

The Toranomon-Azabudai redevelopment project is expected to be completed by March 2023.