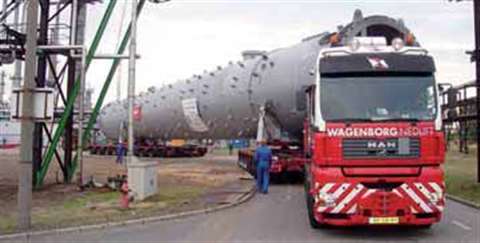 Wagenborg Nedlift from the Netherlands came third in Transport Category B award in 2007. The company transported a large C3 splitter column from Flechum, Germany, to the PCK Refinery, on the German-Po

This year the eagerly awaited European Association of Heavy Haulage, Transport and Mobile Cranes (ESTA) 2008 awards dinner will take place at the Okura Hotel in Amsterdam, the Netherlands, on 3 June.

The ceremony is again supported by International Cranes and Specialized Transport magazine and coincides with the first International Rental Exhibition, coorganised by IC publisher KHL Group.

Last year, the awards dinner took place during the Bauma 2007 exhibition in Germany, to great acclaim, and was hailed the largest crane and heavy haulage party in Europe.

About 500 guests from around the world attended the event to witness a range of companies pick up the coveted awards for their lifting and transport activities.

Winners of the main categories included rental giants Mammoet and Convoi from the Netherlands and UK-based Ainscough Crane Hire.

The awards for innovation and development were won by crane manufacturers Manitowoc and Liebherr, respectively. Judges gave the Personality of the Year award to Otto Rettenmaier of TII Transporter Industry International Group, which owns Scheuerle, Nicolas and Kamag.

ESTA is a pan-European association bringing together all national trade associations representing mobile crane rental, heavy haulage and abnormal load transport companies. Its primary objective is to harmonise rules and regulations across the continent. By doing this it aims to become the continent's leading representative for the industry.