This was the tenth edition of EXCON

The Indian government is to invest Rs100 lakh crores (US$1.4 trillion) into infrastructure and industrial projects which could lead to a 40% increase in construction equipment sales, according to Nitin Gadkari, Indian Minister for Road Transport & Highways.

Speaking at the EXCON event in Bangalore, India, Gadkari said that the Government is pumping huge amounts of investment into roads and other infrastructure projects such as the development of waterways, airports, ports, and smart cities.

“For the road sector alone, the Centre is investing Rs2 lakh crores (US$28 billion) this year. The amount of investment for the next year will increase to Rs3 lakh crores (US$42 billion). Within the next five years, the total government spend on the road infrastructure will be about Rs17 lakh crores (US$239 billion),” he said.

Gadkari also said that road construction is currently at 30km per day but will increase to 40km a day by the end of March next year.

Mr S Mishra, Executive Director, Ministry of Railways, announced that the government has decided to allow 100% foreign direct investment (FDI) in the railways as the country looks to add 14,000km to the railway network by 2024. 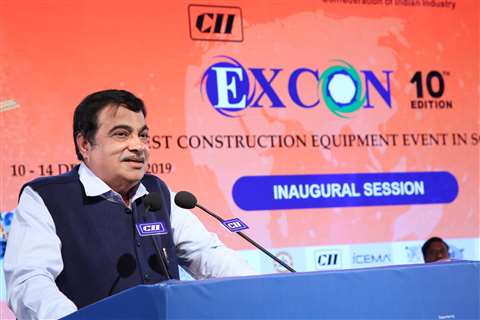 Nitin Gadkari, Minister of Road Transport and Highways of India at EXCON

“The Government has already taken the decision of allowing 100% FDI in railway infrastructure as a significant policy shift to adopt global best practices of world railways and to attract massive investment from all over the world.

“There will be a substantial increase in the capital expenditure and Indian railways would be investing over Rs10 lakh crore (US$140 billion) in the next five years on various projects.”

At the event it was claimed that India currently spends around 5% of its Gross Domestic Product (GDP) on infrastructure but that this should be raised to at least 6%.

The amount of private investment in infrastructure is said to be increasing but is still at a relatively low level, with the construction industry reliant on the government.

It is estimated that the government funds 70% of the nation’s construction projects with private investment accounting for 30%.

Speakers at the event also mentioned that from April 2018 to April 2019 sales of construction equipment, such as backhoe loaders, excavators and pick and carry cranes all declined.

This drop was attributed to a slowdown due to the general election and an especially bad monsoon season. It was predicted though that 2020 would be a good year for the construction industry, in part due to the government’s spending commitments regarding infrastructure.