Tunnelling has traditionally been a very slow process, but the progress of modern-day machines is speeding up 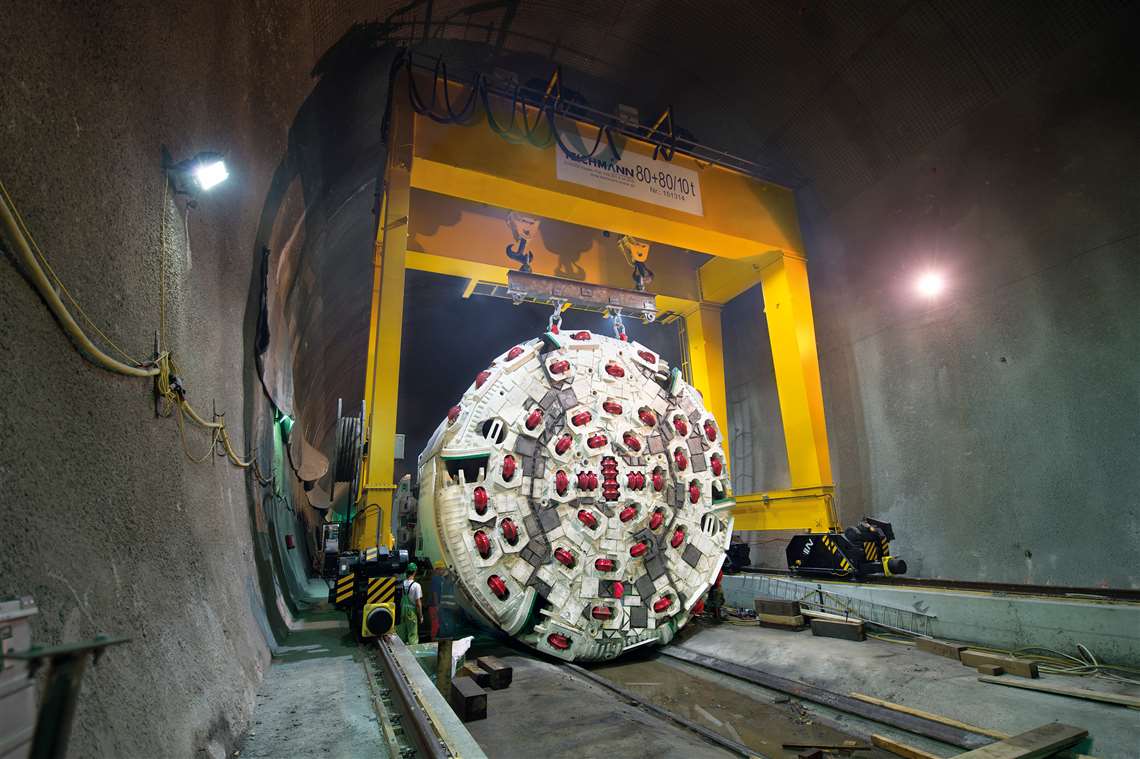 The Herreknecht machine working on the Brenner Base tunnel was a Gripper TBM S-932 with a 7910mm diameter and a drive power of 3,500kW

Sometimes when looking to build a new transport link, the terrain makes it impossible to go above land in an efficient manner, particularly if there are mountains in your path.

The tunnelling experts at German firm Herrenknecht achieved a key milestone this year with one of the company’s Tunnel boring machines (TBMs) having been working on the construction of the world’s longest underground rail link at a length of 64km (each way) in total.

Over the summer months, the tunnelling team, a consortium of Austria’s Strabag and Italian contractor Webuild, completed a 16.7km-long exploratory tunnel, part of the Brenner Base Tunnel project which travels through the Eastern Alps and under the Brenner Pass.

The underground section at the Brenner Base is a key structure for planned sustainable trans-European freight and passenger transport on the north-south axis from Helsinki in Finland to Valletta, on the island of Malta.

The breakthrough at the Brenner tunnel was hailed as a great success with a high degree of precision achieved in the targeted breakthrough into the cavern on the Austrian side of the tunnel. 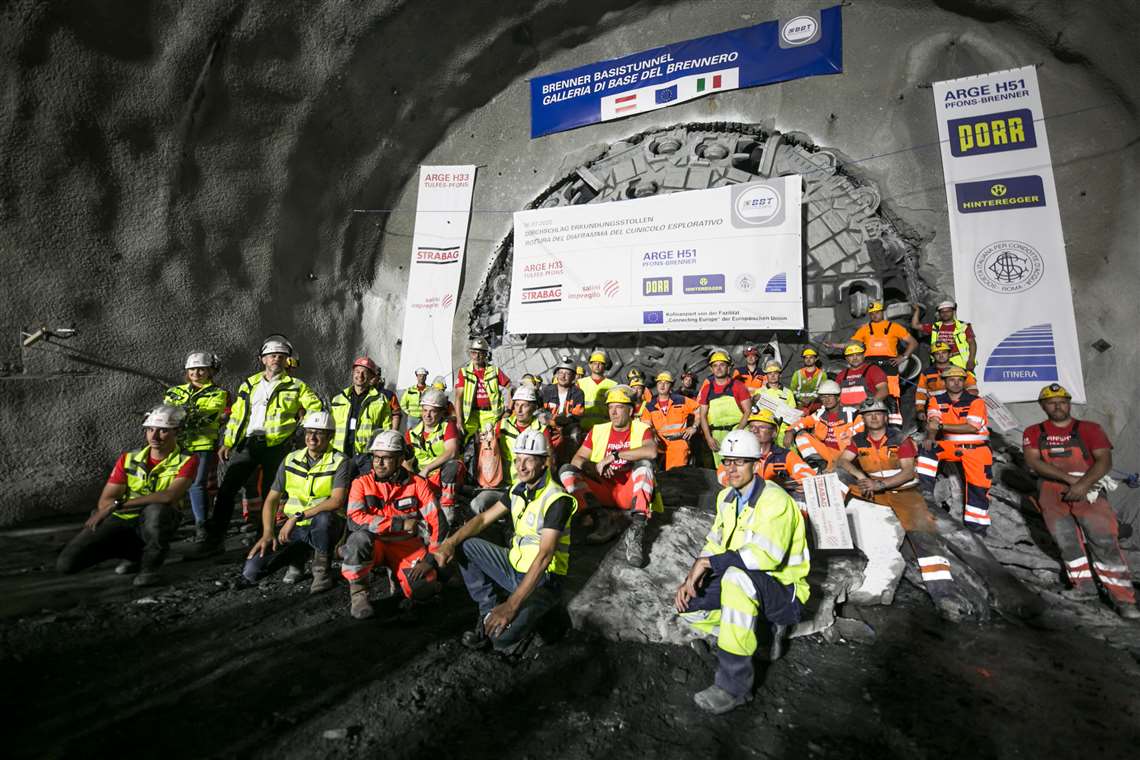 Herrenknecht’s ground-breaking achievement on what is currently the largest European railway infrastructure project, proved an emotional high point for the hard-working tunnellers, engineers and project managers on the day. “We reached our target with pinpoint accuracy,” said Anton Ertl, overall site manager of the construction phase.

Not only did the project aim to make transport faster, it is also now designed to be more efficient. Linking Innsbruk in Austria with Fortezza in Italy, the tunnel takes a considered flat route through the Alps in an attempt to avoid any harsh energy consuming gradients.

Leonore Gewessler, Austrian Federal Minister of Climate Action, Environment, Energy, Mobility, Innovation and Technology, explained the ecological benefits of the project, saying, “Currently, 72% of goods [in the region] are transported by truck. This results in 2.5 million truck journeys a year over the Brenner Pass.

The Brenner team also achieved a new record in tunnelling with Dr Martin Herrenknecht, founder and Chairman of the Board of Management of Herrenknecht commenting, “61 metres and 4 centimetres in just 24 hours with a modern Gripper TBM – in May 2020 the tunnellers at the Brenner Base Tunnel were able to set a new record in hard rock tunnelling.

“We very much appreciate the trust our customers and the client place in our Herrenknecht technology. We are proud to be part of the next record-setting structure in the Alps after the Gotthard Base Tunnel.” 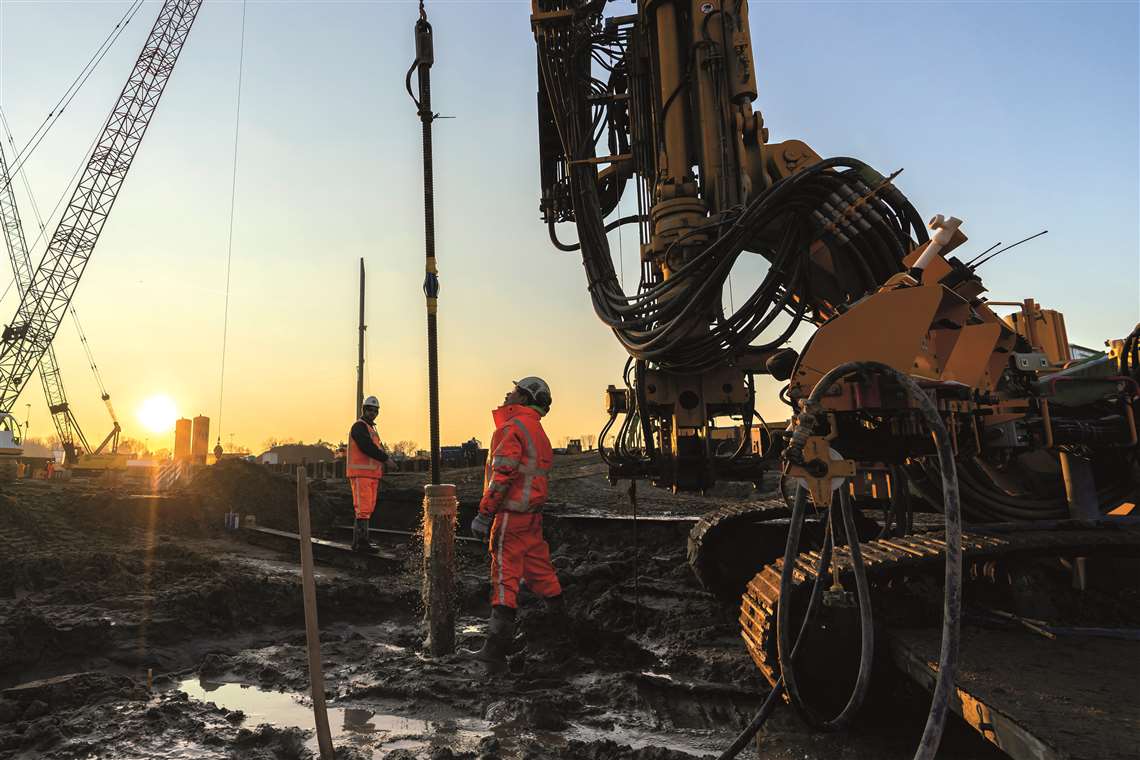 In total, 11 teams with 11 KLEMM KR 806 rigs are being used in Bauer’s Rotterdam project

One of the great aspects of working on a tunnelling project is that in doing so you are primarily working underground; not disturbing surface life above.

This exactly what Bauer needed to avoid when working on a recent project in the Netherlands. With a population of around 650,000, Rotterdam is not only the second largest city in the Netherlands – and home to Europe’s largest seaport – it’s also an important transport hub for freight traffic, as a wide variety of goods flow through from all over the world.

As in the Brenner Base area, most of these goods are transported onward from Rotterdam on freight trains or trucks. In order to better direct traffic in the city and permanently alleviate road congestion, a new highway called the “Blankeburgverbinding” (Blankenburg Connection) is currently under construction west of Rotterdam, between the existing A15 and A20 highways.

Under construction by BAAK, a union of Ballast Nedam and DEME, the new A24 highway will be approximately 4km long and will cross the Scheur River by the new Maasdelta tunnel (part of the construction project) and a recreational area by the Holland tunnel.

As part of the project, Bauer Funderingstechniek, the Dutch subsidiary of BAUER Spezialtiefbau, was contracted to deliver and install Gewi piles, which are micropiles with threads. In total, approximately 10,000 tonnes of Gewi material will be installed as 4,500 individual piles for the southern ramp of the Maasdelta tunnel.

Prior to construction, preliminary pile load tests were conducted in 2018, to investigate the primary friction properties of the three soil strata at the site. Soft clay was identified, followed by firm clay with medium-dense to dense layers of sand detected down to a depth of up to 20m. 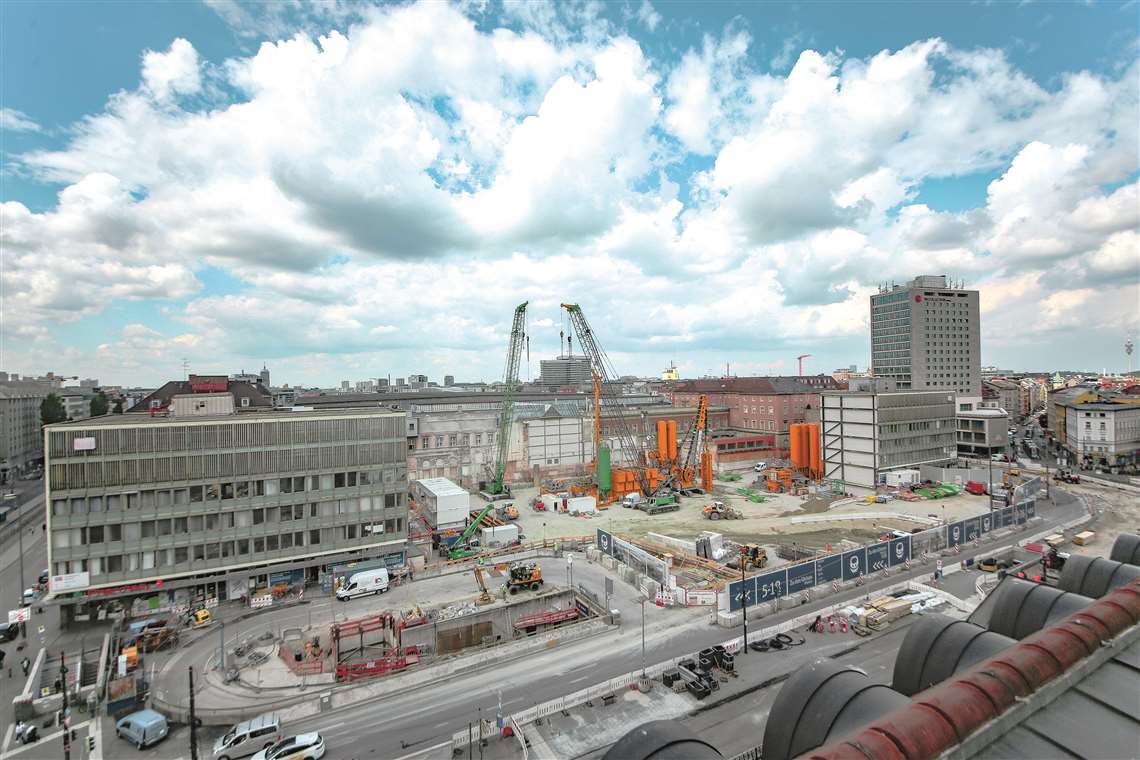 At Munich’s central railway station, the 2nd core route will run underneath all existing platform levels

Following the results, the design of the Gewi piles for the tunnel ramps were adjusted accordingly and the installation of the pile foundation for the southern ramp of the future Maasdelta tunnel, which is 30m deep and on which construction began in the summer of 2019.

The German company has also been working on a separate project in its home country delivering a railway project in Munich. At around 11km in length, 7 of them in a tunnel, and 3 underground stations – the ‘second core route’ in Munich is a major infrastructure project said to be of enormous importance to the area.

At Munich’s central railway station, the second core route will run underneath all existing platform levels. The new S-Bahn station “München Hauptbahnhof” will be constructed at a depth of 41m.

Structurally, it is required to secure the excavation pit against surrounding soil as well as ground water. After the partial demolition of the old station building, and the commencement of work for the execution of the primary supports for the floor slabs, a new section of the mega project started with the construction of a retaining structure consisting of diaphragm walls up to a depth of around 65m for the future underground S-Bahn station. 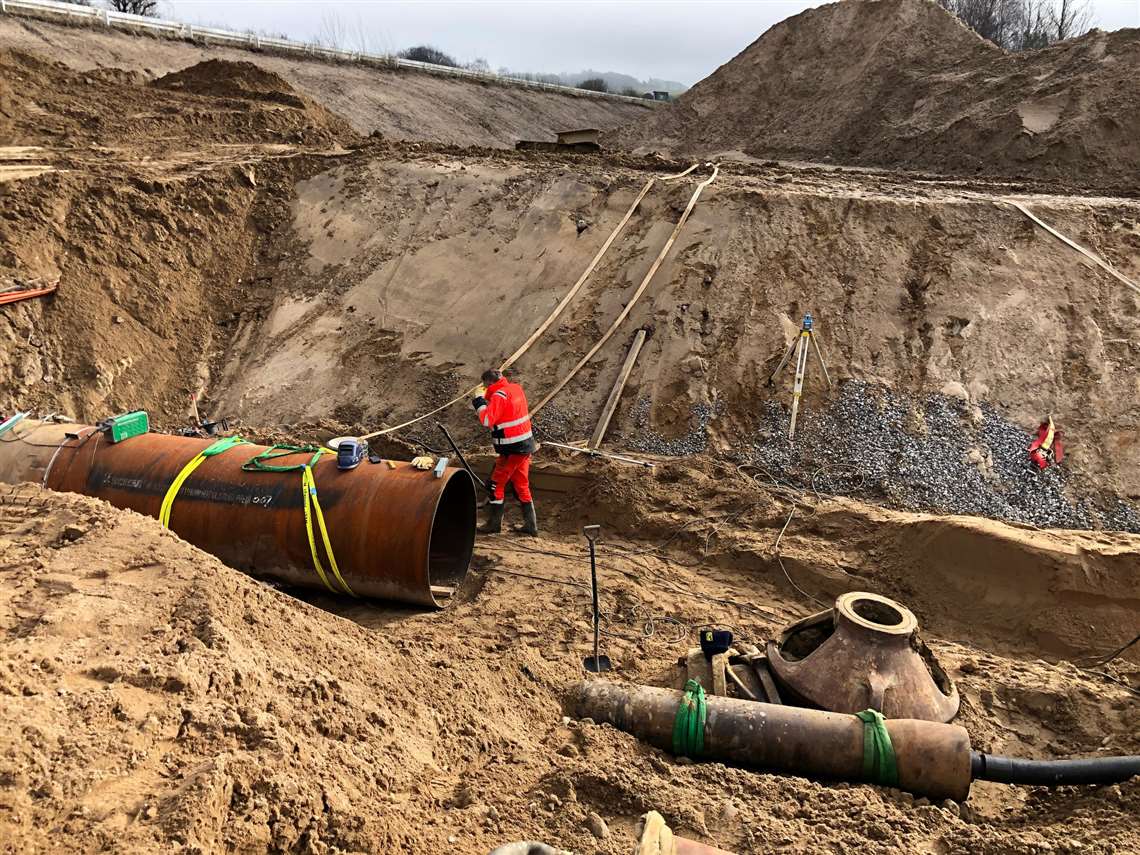 The diaphragm wall top-down method is being used for construction of the Hauptbahnhof underground station. A deep wall of reinforced concrete is initially being constructed to enclose the excavation pit of each station. The wall is made up of a series of cutter-excavated trenches in the ground that are then filled with concrete. This diaphragm wall forms the future outer shell of the station.

Not all tunnels need to be big enough to transport trains and digging isn’t always the most efficient way to get underground. A solution for such a problem involving ramming technology has been offered by German engineering firm Tracto-Technik.

Villy Poulsen, a contractor from Skjern in Denmark installed an OD 1,320mm pipe at a depth of 8m beneath the E20 motorway with Tracto-Technik’s grundoram koloss pneumatic pipe ramming tool as part of the extension of Denmark’s E20 motorway. Including all preparations, the job was completed in only three working days.

Linking the popular holiday island Fyn in the Baltic Sea, this road is one of the busiest sections on Denmark’s motorways, with numerous traffic jams experienced. For this reason, a decision was made to extend the width of the motorway which created the need to implement water extraction pipes.

Head contractor MJ Erikson contacted the installation specialist, Villy Poulsen, to carry out the installation of numerous pipes and service lines for the extraction of surface water; in total 40 pipeline sections.

Initially all these sections were to be installed using the directional drilling method, but due to the various pipe section lengths and diameters a decision was made to apply three different methods: directional drilling, the pilot pipe method and the ramming method were used on all of these motorway sections. In the 40 partial sections, the pipe diameters varied from 323 to 1,320mm and this largest section had a length of 27m.

For the 27m section, Villy Poulsen applied the grundoram Koloss rammer, providing 7,000kN of impact power, to install the duct at a depth of 8m in sandy ground conditions. Work on this section had started with the alignment of the 1,320mm diameter OD pipe and precise positioning of the grundoram Koloss.

After just four hours, the first 20m had been installed and the next 4m could be welded to the first section and rammed in, which was also completed within only one hour. In order to ram in the last 3m, the team had to dispose of the excavated soil first, then the final section also quickly disappeared beneath the motorway.

During the whole process, the sand was rinsed away with water, set at a high pressure from a vacuum truck. Due to the routine of the experienced Pulsen crew and co-ordination of the equipment applied, the whole construction task for the complicated section took only three days.

To have digital issues of the magazine regularly delivered direct to your inbox, click here.