“Big news, folks: The Bipartisan Infrastructure Deal has officially passed the Senate,” President Joe Biden said on Twitter on Tuesday. “I hope Congress will send it to my desk as soon as possible so we can continue our work of building back better.” 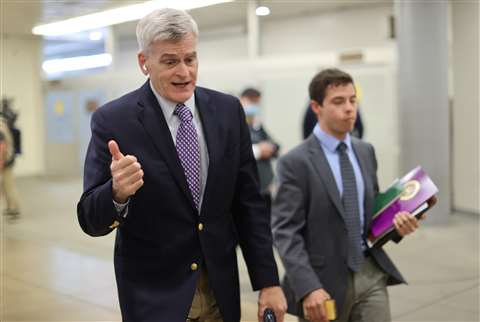 U.S. Senator Bill Cassidy (R-LA) talks to reporters as he walks through the Senate subway arriving for the U.S. Senate vote on the $1 trillion bipartisan infrastructure bill on Capitol Hill in Washington, U.S., August 10, 2021. REUTERS/Jonathan Ernst

Also included is US$40 billion for bridge repair, replacement and rehabilitation. The White House says it would be the single, largest dedicated bridge investment since the construction of the interstate highway system, which started in the 1950s.

The deal also contains US$17.5 billion for major projects that would be too large or complex for traditional funding programs.

“The Infrastructure Investment and Jobs Act is not only a once-in-a-generation opportunity to rebuild our nation’s infrastructure, but an opportunity to restore our economic competitiveness, enhance equipment manufacturers’ ability to meet the challenges and opportunities of the 21st century, and improve the lives of all Americans,” said Kip Eideberg, senior vice president of government and industry relations, Association of Equipment Manufacturers (AEM).

The bill will now go to the House of Representatives before President Biden can sign it into law. The House is likely on break until the fall.