The remit of the all terrain is broad. It’s a ‘go anywhere, do anything’ kind of crane. For crane OEMs this means a wide potential customer base.

Manufacturer Liebherr says the all terrain is the most popular of its mobile cranes worldwide. The company offers all terrains with lifting capacities ranging from 30 to 1,200 tonnes and all of its all terrain models are available globally.

The OEM identifies its largest markets as being the USA and Europe, with Germany buying the most of this model type within the European community.

Daniel Janssen, Hüffermann Krandienst managing director, said, “The powerful LTM 1650-8.1 is to be used for the infrastructure segment. The LTM 1450-8.1 is planned as a fast-erecting crane for day-to-day operations and to support our tower crane division.

“It will be used at high hook heights for top slewing tower cranes. With its 85m telescopic boom it is a very flexible mobile crane for tower crane erections, especially from 60m upwards.”

Company owner Marco Flossdorf says the new crane will be used for a range of applications for hoisting heavy loads, transferring goods to barges, assembling concrete components, carrying out service activities on wind turbines and in industrial activities such as lifting components into plants using a long luffing jib.

German crane firm Kran-Maier bought a Liebherr LTM 1070-4.2, which is being used to erect pylons for Deutsche Bahn, in May 2021.

A four-axle LTM 1120-4.1 arrived in June 2021 at the company’s base in Montevideo, Uruguay. The two five-axle machines are being used for tandem hoists, loading and unloading items at wind power sites.

Andrew Soper, all-terrain and hydraulic truck crane product manager for US manufacturer Link-Belt, explained, “The over-the-front and boom dolly configurations of our most recent all terrain, the 175|AT set it up well for both domestic and international transport requirements.

“With standard boom dolly provisions, including a dolly camera, this crane is designed for travel in all geographical markets.

Michael Klein, product marketing manager at Japanese OEM Tadano, stated, “Our offering is designed to cater for the needs of our customers all around the globe, so that we do not provide region-specific models. But we adapt through options or specific variations to comply with regional standards.

“One notable example is the engine emission standards, or axle loads and spacing that vary according to the countries where our customers operate.”

Tadano announced in May 2021 that it supplied a new fully-specified ATF 400G-6 all terrain crane to Brazilian crane service provider Cunzolo.

The 400 tonne class crane will now be the largest capacity crane in the company’s fleet, which almost doubles the lift capacity of its previous largest crane.

Cunzolo said that the new large capacity all terrain will allow it to serve more customers and a wider range of jobs. The company also acquired 10 additional truck trailers in order to transport the crane’s boom, accessories and the 136 tonnes of counterweight.

Marcos Cunzolo, Cunzolo’s general director, commented, “With the new Tadano ATF 400G-6, we will now be able to also meet the needs of customers who would have happily asked for a crane of this capacity class earlier on.

“We will also be able to win over potential customers that originally never contacted us because we were missing a crane of this size in our fleet.

“Thanks to the ATF 400G-6 we will now be able to add a whole series of lifts to our range of available services.”

Cunzolo’s new Tadano ATF 400G-6, which can be equipped with an up to 31m long fully hydraulically telescopable and tiltable jib (HTLJ)

String of firsts for the all terrain crane section
Tadano announced in June 2021 that it supplied Spanish crane service provider Grúas Cigales with the first ATF 60G-3 in Spain, which follows Grúas Cigales’s 2020 purchase of a Tadano ATF-100-4.1.

According to Tadano, one of the ATF 60G-3’s attributes that appealed to company owner Santiago Rodríguez included the engine’s placement at the back of the superstructure, which ensures that the ATF 60G-3 has an optimal axle load distribution.

Tadano stated that this ATF 60G-3 is the only 60 tonne crane on the market with the capability to travel on public roads while staying under an axle load limit of 10 tonnes and carrying a hook block with a 20 tonne load capacity.

The first ever Grove GMK5250XL-1 to appear in Singapore, a sovereign island city-state in maritime Southeast Asia, was bought from manufacturer Manitowoc by crane rental agency Sin Heng Heavy Machinery.

According to Manitowoc, the 250 tonne capacity crane has the longest boom on any five-axle all-terrain machine and one of the highest capacities in its class. It will be put to work on projects throughout Singapore on construction, civil engineering and oil & gas projects.

Italian crane rental agency Vernazza Autogru also bought a new Grove GMK5250XL-1, although this crane is destined for Vernazza Autogru’s France-based fleet. The GMK5250XL-1 increases the total number of Grove all terrains in the company’s fleet up to eight.

Vernazza Autogru stated that it was taking job orders for the new crane even before it had taken delivery of it.

Diego Vernazza, Vernazza Autogru’s general manager, said, “We were immediately attracted by the GMK5250XL-1, and I guess we were not the only ones because many of our specialised customers.

“As soon as they learned about our purchase decision, already requested and booked this crane for their projects – even before the all terrain crane’s delivery.”

According to Ainscough, the arrival of the LTM 1650-8-1 represents a key milestone for the British construction industry and will enable Ainscough Crane Hire to play an instrumental role in the key infrastructure projects that will drive forward the Covid-19 pandemic economic recovery, such as HS2.

Scottish crane and transport business Forsyth of Denny has bought the last new LTM 1500 ever to be sold in the UK and Ireland, which is being superseded by the LTM 1650. The company has also taken delivery of the first LTM 1120 to go into service in Scotland.

Mark Syme, the Forsyth general manager, said, “We believe the concept of the 120, with a crane of that capacity running on four axles with such a long telescopic boom, will find its own niche in the market.”

XCMG’s all terrain expansion plans
Chinese crane manufacturer XCMG stated that with the boost of China’s Belt and Road Initiative it has been increasingly exploring international markets as part of its overseas expansion plans and has seen demand worldwide for its all terrain offerings.

XCMG said that its 60 tonne, 100 tonne and 130 tonne capacity XCA models (XCA60_E, XCA100_E, XCA130_E) were designed specifically for high-end international and European markets, with all models being CE- and WVTA-certified.

The XCA60_E has been sold to countries including the Netherlands, Spain and Turkey, the XCA100_E to Georgia and Germany, with the XCA130_E to Bulgaria and Spain.

Chinese crane manufacturer targets high-end markets
The company identifies Australia, Europe and North America as being key high-end markets that it is focusing on. The underlying logic is that if it can crack these demanding markets then the quality of its products is proven.

And XCMG is fast making inroads. In Europe it is the only Chinese manufacturer to obtain the German and EU’s Whole Vehicle Type Approval, while in North America it says that it has developed its local marketing and servicing network.

In Australia, another market with high standards, XCMG commented that its large-tonnage all terrain cranes are being particularly well received. This year the company claimed that it has already received batch all terrain order’s which will be used for port and mining applications.

The versatility of the all terrain crane underpins its evident global popularity, meaning that they are used in a wide range of applications across many industries.

Klein added, “The larger units are used wherever there is a need for project work types of application, like industrial engine removal, work in the oil & gas sector to contribute building refineries, or infrastructure.

“In the middle of the capacity class spectrum, where our five-axle family would typically operate, work includes tower crane erection, placement or removal of air conditioning units on rooftops and placement of foot bridges.”

With such a breadth of applications the future of this crane segment seems assured. 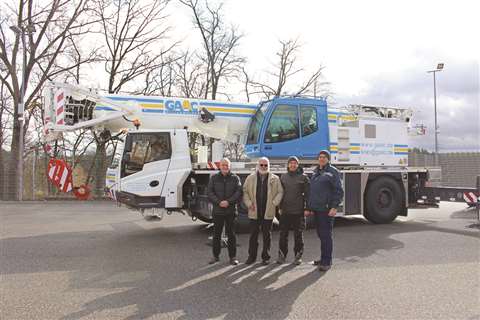 All terrain cranes: all together
It was a good year for all terrain crane sales with the number of units up nearly 20 per cent in 2019. Manufacturers must be largely up to date with their range renewal programmes as new models have been thin on the ground recently but there are still some interesting developments. Alex Dahm reports