Volvo Construction Equipment (CE) will once again be headline sponsor at the 2020 World Demolition Summit (WDS), which will take place in Vienna, Austria, on 11 and 12 November. 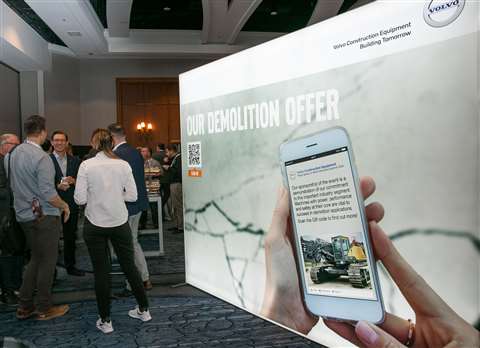 The manufacturer confirmed its renewal ahead of the 2019 event in Boston, USA, where the news was announced from the stage to a record audience of more than 450 delegates at the World Demolition Awards dinner.

Volvo CE has been a valued partner of the WDS since the first event in Amsterdam in 2009, and Vienna will be the sixth different venue it has been associated with after subsequent summits in Miami, London, Dublin and Boston.

The Boston event also set new records for the number of awards entries and sponsors, and we are delighted to further announce that three Gold Sponsors – OilQuick, Sennebogen and Steelwrist – have already signed up for Vienna. All three will have the opportunity to announce the result of one of the awards categories and present the winner with their trophy.

Elsewhere, British excavator specialist Kocurek has confirmed a silver sponsorship while Netherlands-based equipment manufacturer Demarec will sponsor the pre-Awards dinner drinks. Thank you to all our sponsors for their support.

There is no better way to promote your company, products and services – and network with key decision makers in the demolition industry – than by signing up for a World Demolition Summit (WDS) sponsorship.

There is a range of possible options depending on your budget – and the earlier you commit, the more you will be able to benefit from pre-event publicity ahead of the event itself.

More details of the WDS – including a video of highlights from Boston – will shortly be online at www.demolitionsummit.com

Doosan to show XiteCloud tech at Hillhead Digital
Doosan Infracore’s new XiteCloud quarrying, mining and construction platform will be presented to the UK for the first time at this year’s online event
Loading...
Latest News