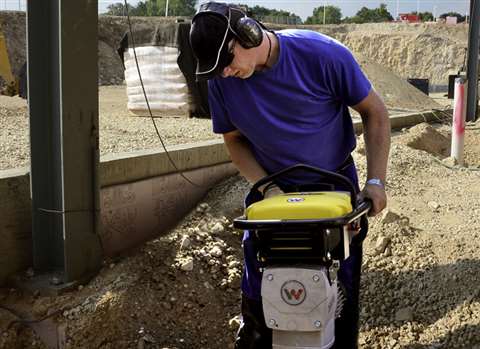 The Wacker Neuson AS 50 in action

Wacker Neuson has unveiled a new battery-powered rammer. It said the new rammer, available in two versions from 2015, would be emission-free and enable operators to work without a power cable.

It said the two versions were the AS 50 and the smaller AS 30 - the AS 50 was developed for all traditional rammer work, while the AS 30 was created for the compaction of pipe gussets.

"The battery-powered rammer is a real novelty on the market. And it is the result of close collaboration with our customers, because we have implemented some requirements here that companies and users have brought to us," sais Alexander Greschner, managing director of Wacker Neuson Produktion.

"For example, the battery-powered rammer with zero emissions can fully display its strengths in trench applications and when used in buildings. For emission-free work it not only protects the health of the operator, but also expands the range of application of the rammer – and therefore the flexibility of the company."

The company said the units were powered by lithium iron phosphate batteries, which offered a long service life and can operate in temperature between -10 and +50 degrees Celsius.

According to Wacker Neuson, the battery-powered rammer could save more than 60% in operating costs.