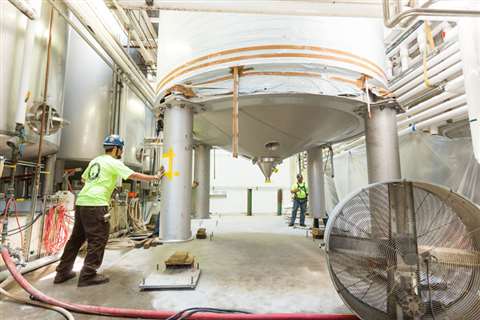 One of the tanks being lowered through the roof

The new brewery tanks form part of a US$7 million expansion project at the plant. The brewery is in a busy urban area and as a result of its location the four tanks had to be installed from the edge of a busy parking area. Challenges included close-by buildings, vehicles and overhead power lines.

To complete the lift, GLBC and Superior obtained numerous permits, escorts and permissions to close nearby roads.

For the Brite tanks and fermenters, Superior used a 250 US ton Grove GMK 5220 crane and a 50 ton Grove TMS 750 as an assist crane. The tanks were lifted and tilted into position at a working radius of 38 metres, before being lowered by the Grove GMK through the brewery roof.

Greg Lemermeier, GLBC manager of engineering and technology, said, “This was our first time working with Superior. They were recommended by a general contractor and were great to work with.

“Through the various stages of the project, they have had several different crews out and all have been professional, efficient and very flexible with the various changes and surprises that tend to come up on complex projects. They were also very safety conscious, and always followed our safety guidelines. We plan on working with them in the future.”