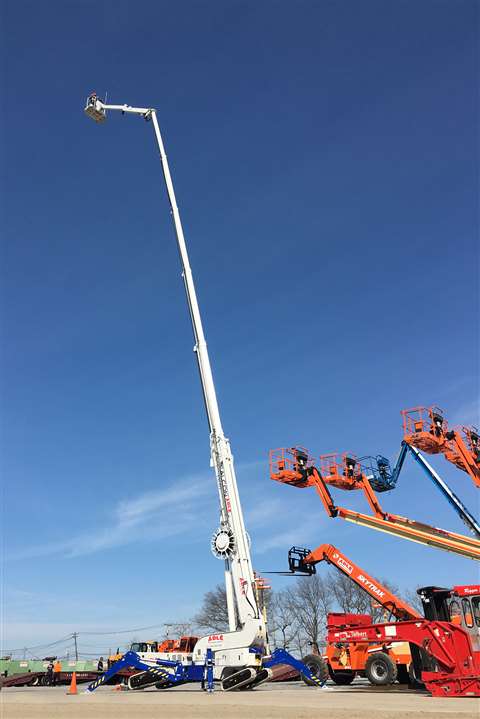 Able Equipment, based in Deer Park, NY, has taken delivery of a ReachMaster Falcon FS170T, the first of its kind to come to North America.

The 170-foot working height unit weighs less than 30,000 pounds and is 4-feet-wide, allowing it to slip through standard double doors. It features 52 feet of outreach, a battery/diesel engine combo, auto-setting outriggers and a 20-foot double jib for up-and-over reach.

Steve Laganas, owner of Able Equipment, said he wanted something in his fleet that "gave him an edge," while also recognizing there is growing need for access applications that require working at height but with extreme size and weight restrictions.

In August 2013, Able Equipment took delivery of their first ReachMaster Falcon: the Falcon FS105. Since, then an additional seven Falcons have joined the Able fleet including the FS95, FS138 and now the new FS170T. In addition, Able has also added several Bluelifts to their fleet including a B59 and a couple of B72s.

“ReachMaster lifts are one of my best niche items, they have tremendous ROI and I’m renting them not just regionally, but nationally," Laganas said.

ReachMaster president Ebbe Christensen said, “Both Steve Laganas and Able Equipment exude innovation and are constantly looking outside of the box to serve their customers at the highest levels and compete in the market not just today, but for many years to come. We are very grateful for their partnership and support of ReachMaster over the years.”