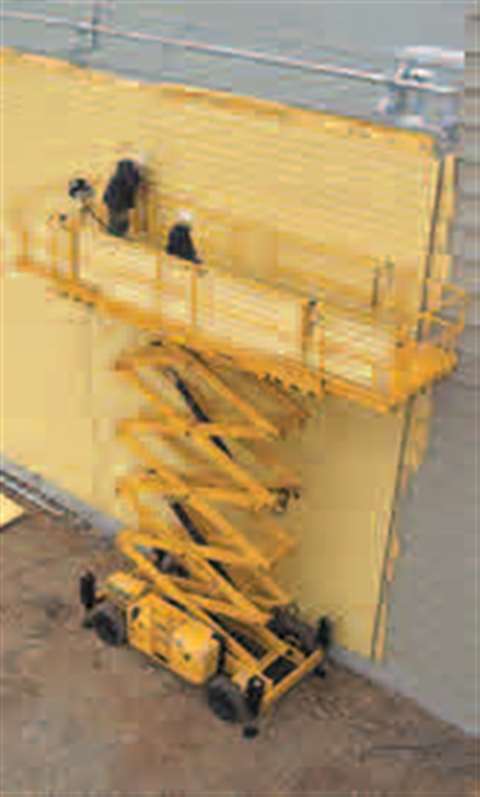 More than 1300 people are killed and 800000 injured each year through accidents on construction sites within the EU, and falls from height are one of the biggest causes. Boosting safety is a top priority for the access industry and most recently launched machines feature the latest safety innovations.

“The overall effect [of the European Directive] will be more people using powered access equipment in their daily work,”said UK based Nationwide Access sales and marketing director Harry Waters. “This would be great if we could be sure all these additional users received adequate training; but that is unlikely to happen. Such novice users could be more dangerous in the basket of an unfamiliar scissor lift than on the rungs of a ladder they have been using for years.”

Mr Waters added that the company, which is one of Europe largest powered access rental companies, and its sister Zooom companies in Germany, France and Spain, “regularly see evidence that employers neglect [their duty to train their staff]. We have to recover damaged machines on many occasions and it is often clear from the type of damage that the operator simply wasn't competent.”

The implications of the new directive for end users is the main focus of the first day of seminars at this year's APEX Exhibition. (see page 34 for more details of the show).

The atmosphere at APEX is expected to be buoyant and positive, if the results of Access International recent 2005 confidence survey are anything to go by. According to the survey, 87% of the respondents are expecting the powered access sector to grow in 2005 and 30% were anticipating double-digit growth.

The combination of rising prices and lengthening lead times-up to 12 months for some access systems – were a concern for many end users during 2004 and have continued into 2005. The situation means that renting is probably the best option to meet short-term needs but it is also boosting the used equipment market. The number of rental companies and end users planning to buy used equipment this year has almost doubled compared to 2004 at 53% and 45%, respectively.

With the anticipated growth, the powered access market remains a fiercely competitive sector and there have been a number of mergers and takeovers in the last 12 months. Key changes in the sector included Palfinger's take over of German truck mounted aerial platform manufacturer Bison. Palfinger CEO Wolfgang Anzengruber said that the aim of the acquisition was to, “quickly become the European market leader in the truck mounted aerial platforms sector.”

Danish platform manufacturers Denka Lift and E Falck Schmidt have now merged to form Worldlift Industries after two years of talks. The move follows the acquisition of Falck Schmidt's platform business by Denka's owner VT Holdings. Mr Falck Schmidt, who now heads up the new company, said, “Our products were quite complementary and we could also see a good synergy in pulling together our forces in terms of sales and exports.”

Materials hoist manufacturer H Steinweg went into receivership last year but its assets have recently been acquired by Germany's Böker Group. Meanwhile, the Swedish based Intervect Group, which was created through the merger of Alimak and Hek, has rebranded itself as Alimak Hek to capitalise on its strong brand names.

One of the biggest launches this year in terms of size is Genie's Z-135/70 articulated boom which provides a maximum working height of 43,1 m, horizontal outreach of 21,3 m and an up-and-over clearance of 23 m. The machine features Genie's X-chassis axle configuration – which allows each axle to pivot from vertical mounting pins – and Jib-eXtend to extend the platform from 3,7 to 6,1 m.

Manitou has also added two new articulated access platforms to its product range – the 180 ATJ and 160 ATJ. Both machines have been designed to compact down for easy transport and for speed on site, reaching full height in around 40 seconds. The units are also fitted with four wheel drive and 18 in (420 mm) tyres, which allow them to be used over rough terrain.

Bronto Skylift has extended its XDT telescopic platform range with addition of the S 46 XDT, which has a 46 m reach. The range now has five models, offering working heights from 37 to 60 m, and all feature automatic jacking and levelling functions and a multiple working cage system.

Two years of research and development have gone into Kesla's latest self propelled telescopic platform and the results will be unveiled at APEX. The new XS 190 weighs in at 3700 kg, offers a 19 m working height and has a four wheel drive system for access over rough terrain. The machine can compact down to 6,3 m in length and 2,1 m in width for easy transport and the two man basket has a load capacity of 230 kg.

The new Merlo Space 11 system features a self contained telescopic boom, with elevating and slewing functions. The personnel platform adds an extra 11 m of working height and 7,9 m reach to Merlo's Panoramic and Roto telehandlers, if suitably configured.

JLG is now manufacturing the Liftlux range of scissor following the company's buy-out of the brand from Grove Worldwide. JLG has plans to introduce nine new Liftlux models, with working heights of between 15,3 and 32 m, over the next few months. The first - the 153 22 - will be launched at APEX in September.

Pinguely-Haulotte is to launch three truck mounted aerial platforms in the 16 to 23 m working height range at APEX and also has plans to develop a 60 m truck mounted platform. The company also said it will be introducing two self propelled booms later this year or in early 2006. The 16 and 20 m truck mounted machines will be telescopic models, while the 23 m machine will have an articulating platform. The design and development of the new truck mounts has been carried out completely by Haulotte and are unrelated to the badged machines which it exhibited at Bauma last year, which were produced by Italmec in Italy. Niftylift has recently added the 150T trailer mounted platform to its range, and the company claims that it sets new standards in trailer mount design. The platform has a maximum working height of 14,7 m or an outreach of 7,53 m and features hydraulic outriggers, which are designed to protect the hydraulic rams from damage. The 1,4 m wide platform has a safe working load of 225 kg.

Alimak's new modular Scando 650 hoist was launched at ConExpo in March and offers flexibility through its large range of configurations. Options on the hoist include different door/gates, drive units, speed and payload, and it is available as a single or twin car. The Scando 650 can operate at up to 65 m/min but uses -40% less power than previous Scando models.