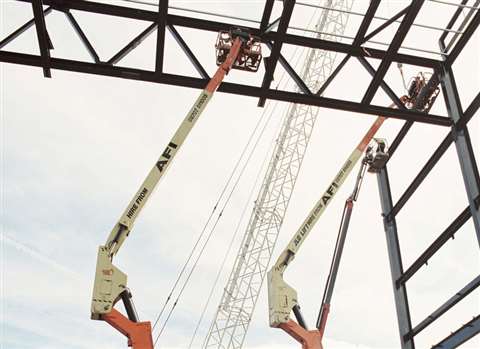 Two of the AFI boom lifts in action at the Exhibition Centre Liverpool.

AFI has strengthened its presence in the UK with the acquisition of Altitude Access.

The East Midlands-based company has a turnover of UK£1.6m, a rental fleet of 180 powered access machines and a depot. The Altitude Access brand will be incorporated into the AFI brand.

AFI director Steve Williams said, “This further acquisition once again demonstrates AFI’s financial strength which enables us to capitalise on opportunities as they arise. Existing AFI customers will gain from AFI now having a stronger presence and resource in the East Midlands, and Altitude Access customers will benefit from having access to one of the most modern powered access rental fleets in the UK.”

AFI has a fleet of approximately 5,000 machines and turnover of over £50 million.

The AFI acquisition follows a current year investment of more than £10 million in over 600 new access platforms and a further expenditure of over £1 million in its delivery and service van fleets.