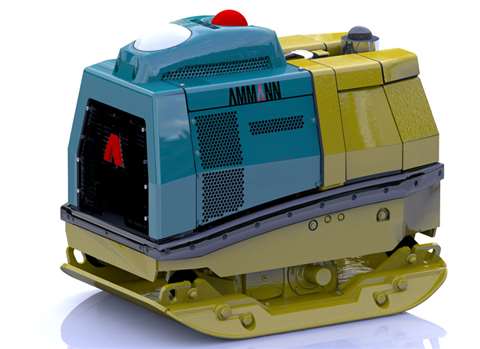 Ammann will present the prototype of its first autonomous vibratory plate

Ammann will present the prototype of its first autonomous vibratory plate at Bauma – and a world first, according to the company. The APH 1000 TC features electro-hydraulic controls, based on an existing remote-controlled vibrating plate.

In ‘Teach In’ mode, the operator uses the remote control to navigate the plate along the borders of the area to be compacted. This is essentially setting the boundaries for the plate compactor. The number of vertices is not limited and the machine automatically detects the closed border.

After clicking the ‘Run’ button, a working strategy is calculated and the field is compacted strip by strip. A GPS system is supported by an electronic compass and collision detection. Deviations of the GPS system are compensated by an overlap of the passes to ensure all areas are compacted sufficiently, according to Ammann.

And the manufacturer said it would also showcase a wide range of other new launches, including its latest line of APF forward-moving vibratory plates, boasting the company’s new Z-shaped tow bar mountings, which are said to isolate the guiding hands from vibration and reduces operator fatigue. The new line consists of the APF 11/33, APF 14/40, APF 14/50 and the APF 20/50.

Ammann will also display the first two models of its new ARS line of single-drum soil compactors (the ARS 200 T4f/T3 and the ARS 220 T4f/T3), boasting its Ace Force compaction measurement system, while the new Ammann ART 240 T4f pneumatic-tyred roller will also be on show.

The company will also showcase a new mini paver, the AFW 150-2, which weighs 1150kg and boasts paving width capabilities of 250mm to 1650mm.

Ammann said the entire compact line-up would provide a performance range from 30m³/h to 130m³/h and would be available in the near future.