Brandenburg was contracted to perform the demolition and asbestos abatement of the Radisson Star Plaza Hotel and Convention Center, which stood in north-west Indiana for over 48 years. The iconic Radisson at Star Plaza hosted several famous acts over the decades from Johnny Cash to Chris Rock. The demolition of the hotel is making way for a redevelopment legacy project to honor the late billionaire Dean White’s contributions to the area and to continue to make the area a destination. The location of the project at US Route 30 and Interstate 65 made for a logistical challenge as it is one of the most travelled intersections in that part of the state. The close proximity to major roadways required detailed planning and careful performance of the proper removal and disposal of approximately 14,000 sq m (150,000 sq ft) of roofing that had asbestos containing material. 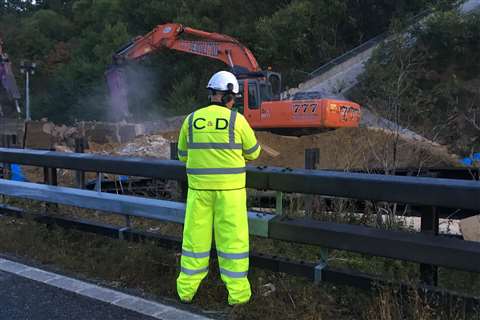 Few demolition projects could have impacted on so many people and stakeholders as taking down the M20 bridge following a Bank Holiday collision.

One of the UK’s busiest motorways would need to be closed and this would inevitably throw up a multitude of issues for commuters struggling to get away for their holidays, travelling to work or just getting from A to B. Throw in the fact that the M20 is the main route into Dover and the Channel tunnel and the issue goes from being domestic to European.

This was the scenario facing demolition contractor 777 when it received a call out of the blue from the Highways Agency. It also had to contend with a lack of information on the bridge and an imposed timeline of just 36 hours to get the job done and the road re-opened…usually this would be a six-month project.

National Grid has previously dismantled two gasholders at the Rochdale site. This project represents the final giant step for the site to bring it back into beneficial use for the local community. The integrated project team included National Grid, Advisian (WorleyParsons Group), Erith Contractors Limited, AECOM, Mace and Newgate Communications.

The last remaining gasholder at the site dominated the town’s skyline and was considered a local landmark. By collaborating for over six months before demolition, the team identified the project constraints and sensitive aspects.

To address concerns, the team implemented a programme of early engagement including direct mail-outs, community drop-in sessions, proactive press engagement and presentation at local council area forums. To ensure the local community could engage with National Grid, a community hotline and bespoke project email were established.

Equipment rental: How to improve sustainable business practices
When it comes to sustainability in the equipment rental sector, Kevin Appleton says businesses should stop the virtue-signalling and look for meaningful actions