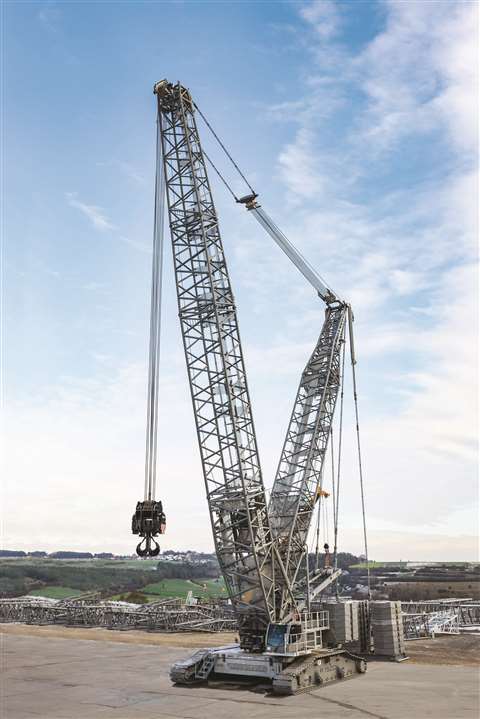 A multi-coloured array of tool-equipped machines will be shown by Jekko. It claims to be the first manufacturer of mini cranes offering manual and hydraulic jibs.

The Euromach Sampierana track-driven SPK60 is a non-stabilised crane with a 3 tonne capacity extendable track in pick and carry mode, a 6 tonne capacity and a 28 metre boom with jib.

The MPK50 is new 5 tonne pick and carry battery-powered mini crane. Also new is the MPK25, an evolution of the MPK20 with remote control a 2.5 tonne capacity and therefore said to be the ideal crane for rental, glazed panel laying, and industrial handling and maintenance operations.

A series of six new Kobelco crawler cranes will be launched, two of which will be on show. All will have a new EU Stage IV and US EPA Tier 4 Final engine with lower emissions of oxides of nitrogen and particle emissions reduced by up to 90 %, the Japanese manufacturer said.

For transport the heaviest component is given as 45 tonnes to allow unrestricted movement worldwide. While the central crawler section with slew ring weighs 55 tonnes, a removable A-frame allows the weight to be reduced to 45 tonnes.

Liebherr-Werk Nenzing in Austria has developed a new 100 tonne capacity class lattice boom crawler crane. The LR 1100 will make its debut at Bauma and deliveries will start in the middle of the year.

In a departure from conventional design where steel plate is used the new crane has a tubular structure. It improves performance and gives the crane a different appearance, the manufacturer said. Easy transport and quick set up are features of the new LR 1100. The boom foot and crawler track frames stay on during transport. Instead of having to be dismantled and removed, the catwalks fold down.

An option that increases capacity by around 20 % is a counterweight system that is swung backwards hydraulically. Fixed and luffing jibs are available.

Power is from a 230 kW Liebherr diesel engine built to meet Stage IV and Tier 4 Final exhaust emission standards. Engines without exhaust after treatment can be specified for markets with other regulations, the manufacturer said.

A new Maeda mini crane with articulating hydraulic boom and crawler track carrier will be shown by European distributor AB Kranlyft. A narrow aisle, operator-controlled crane like the rest of the MC range, the MK1033C has an hydraulic six-section luffing boom and jib.

The MK1033C is still narrow enough to fit through a standard doorway and weighs less than 2 tonnes. It has a capacity just below 1 tonne, a maximum working height of nearly 11.5 m and maximum working radius of almost 10 m. Each outrigger can be placed in seven horizontal positions and six outrigger length positions.

The basic model has a diesel engine and comes with a fixed crane hook on the end of the boom to reduce the distance between the top of the boom and the hook (headroom). There is an optional winch and additional options available are power from a petrol engine or a dual fuel petrol or LPG engine, or a 380-400 Volt electric motor.

Also on display will be the updated Maeda CC1485. It has an EU Stage 3b engine making it up to 40 % more fuel efficient, Kranlyft said. Features of this more compact model include a fully enclosed air conditioned cab, minimal tail swing, two-speed winch, four-fall and two-fall hook block.

Sennebogen’s latest model, the 6300, is a 300 tonne capacity duty cycle crawler crane. The Bavarian manufacturer’s largest model to date is now ready for production and will be seen publicly for the first time at Bauma with the display of the first unit manufactured.

Applications include dredging, mining and special underground engineering operations. For lifting work an 80 m main boom is available. To drive attachments the hydraulic pressure is up to 350 bar and there is a 2,000 litre tank plus oversize lines and valves, the manufacturer said.

The 125 tonne capacity Sennebogen 3300 lattice boom crawler has been upgraded with a new Tier 4 Final engine. The 186 kW Caterpillar diesel engine drives a multi-circuit hydraulic system. The boom can be between 13.1 and 94 m long.

In the telescopic crawler crane category Sennebogen has the new 50 tonne capacity 653. It has a 30.4 m full power boom and pick and carry duties. Typical applications include structural engineering and bridge construction. It has a Tier 4 Final 129 kW Cummins diesel engine. The full power boom on the 653 allows infinitely variable extension and retraction over its full 30.4 m length. A fly boom on the 653 extends the maximum reach height to 43.4 m. It can operate on uneven ground to a maximum inclination of 4 degrees.