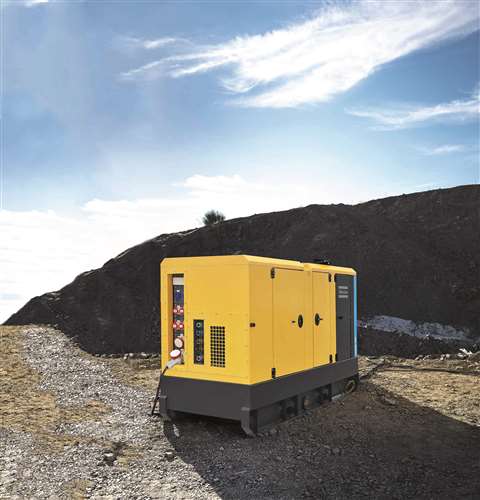 The new range of clean drive technology equipment on display will include the company’s E-air electric-powered compressors and its battery-powered HiLight Z3+ lighting tower.

Since they do not have a diesel engine, they do not require refuelling, meaning noise levels are reduced and maintenance is simplified. As they don’t produce emissions, owners need not worry about emissions regulations.

With the EU Stage V regulations introduced Atlas Copco will also use the exhibition as a forum to provide companies with guidance about the new regulations and how the company’s equipment can help users make a smooth transition towards compliance.

New innovations to be exhibited include the latest models from Atlas Copco’s QAS 5 generator range, as well as the new QAS VSG (variable speed generator). Both models were said to offer reduced consumption and emissions, as well as a smaller footprint.

The QAS 35 VSG has variable automatic speed control from 800 to 2550rpm and a built-in power management system that is said to enable fuel consumption to be reduced by up to 40% compared with similar models. Meanwhile, the QAS 5 offers quieter operation, a 20% smaller footprint than comparable models, reduced engine emissions and 24-hour autonomy.

Caterpillar’s range of industrial engines meeting EU Stage V emission standards will be on display, including the C2.2, C3.6 and C4.4, as well as the new C13B industrial power unit and the C27.  The C7.1 and C9.3B engines will be featured in hall B6.

The XQP100 generator set can either meet EU Stage IIIA emission standards or provide low fuel consumption performance for customers in non-regulated territories. With a robust, rental- or mobile-ready construction, the product line is designed to be easily transported around project sites safely and efficiently. 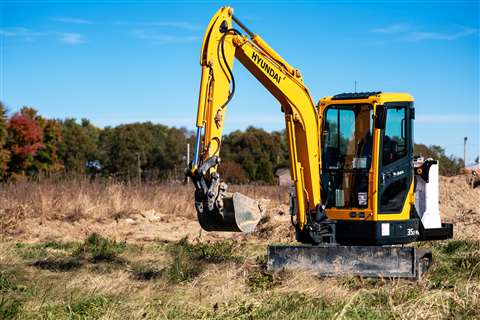 Cummins will display an electric prototype mini excavator at its stand

Stage V will be a key focus for Cummins at their stand, A4-325. Alexei Ustinov, vice president, Off-Highway Engine Business, said, “Since unveiling our Stage V construction engines at Bauma 2016, we have made great progress and are in production with all engine models from F3.8 to X15. We have over 200 machine installations completed or in progress, which is more than at Stage IV. We are developing alternate power capability such as hybrid, electric and fuel cells, however Stage V remains a key part of our plan.” 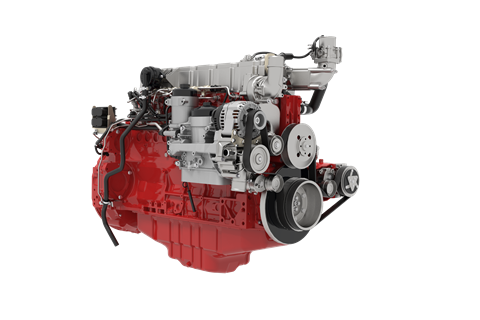 Deutz will be exhibiting a modular product kit for diesel, gas, hybrid and electric drives, on a stand measuring over 400m².

Based on its product modules, Deutz will design the optimum drive system individually for each customer. It said that, thanks to the company’s expertise gained over many years, it would “exploit and intelligently combine” the benefits of various technologies.

At the end of 2018, the company presented two fully working prototype machines. Two telescopic handlers which are normally powered by a 74kW Deutz TCD 3.6 diesel engine were converted – one to a hybrid drive and the other to a full-electric drive. It said the E-Deutz hybrid achieved fuel savings of approximately 15%, recouping the investment costs after just one year of use. 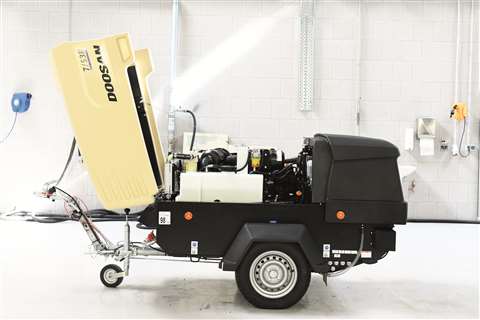 These compressors are typically used to provide compressed air for drilling and boring machines in quarrying, mining, site investigation and water well construction work, as well as specialist applications such as abrasive blasting and temporary compressed air for industry.

The new rental-targeted 7/53R portable compressor, meanwhile, supplies 5.0m3/m of compressed air at a rated pressure of 7 bar. Designed to meet O1 trailer category requirements – the 750kg category – the new 7/53R is said to be suited for the rental market and also as a durable, cost-effective machine for the 5.0m3/m segment, covering the most common applications in construction, utilities and other markets. 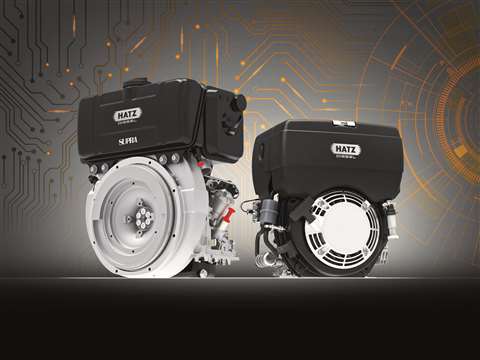 This will allow them to be connected via the Internet of

Things (IoT), giving equipment users and owners access to data on machine use for smaller products, such as mobile lighting towers and gensets.

Data from these small engines could be used by OEMs or fleet owners, such as rental companies, for fleet management purposes, in the same way that larger machines are already being equipped. The company will have 5kW, 8kW and 12kW engines using the E1 platform ready for the start of 2020.

The company is also continuing to develop hybrid diesel-electric powerpacks for lighting tower and gensets.

The industrial Stage V line up from John Deere offers ratings from 36kW to more than 500kW with displacements of 2.9 litres through the upcoming 13.6 litres.

The Stage V technologies used on these engines were said to be built on years of engine and application engineering expertise.

Because the technologies are built on the same engine platform as current Stage IV solutions, the need for OEMs to re-engineer as a result of hardware or mounting changes is reduced, said John Deere. 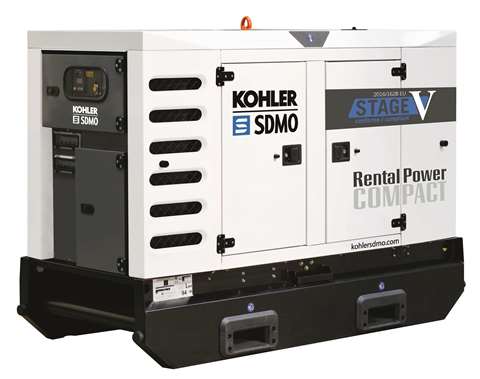 Kohler-SDMO said it was quick off the mark in meeting the new Stage V emission limits, with a 50kVA Stage V model, the R50C5, on show in Bauma. That will be the first of its Rental Compact range (from 22 to 550kVA) to be Stage V compliant, with 20kVA and 330kVA gensets to follow later in the year.

date at Bauma, saying that the line-up demonstrated the company’s belief that there was no one single fuel type for the future of the off-highway equipment industry.

Kubota said its long-term global business strategy has been to provide the markets with an engine platform for every fuel type and application – diesel, gasoline, liquid gas and natural gas – with the further option of duel fuel.

The company will also use Bauma to present a new pillar within its long-term business strategy, which is a further-developed version of the micro-hybrid prototype engine that was first showcased at Intermat 2018, Paris.

Highlights from the range of products on display at the show include the recently launched V1505-CR-T and D902-T.

Kubota will also feature its new 09 Series – which will enter service in 2020 as a global engine platform – which has been developed for upcoming Chinese non-road emissions regulations in addition to the EPA Tier 4 and European Stage V regulations. 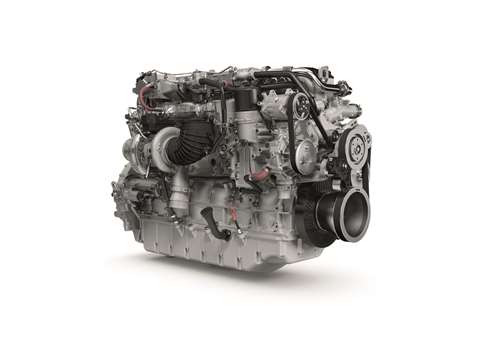 Man Engines wants to detach itself from the limiting label of truck engine manufacturer and further invest in its range of off-highway diesels. Its new D4276 six-cylinder inline engine is a special development for heavy-duty off-highway machines with an eye to construction vehicles.

The engine has been developed especially for applications that demand high power with full power operation at up to 70%. A maximum torque of 3280 Nm is delivered already at 1100 r/min speed and remains constant up to 1500 r/min. The output power is between 450 and 515 kW depending on the power stage and, with a dry weight of just 1280 kg, this engine has a high power-to-weight ratio.

Perkins will complement its range of off-highway diesel engines by showcasing a further three engines highlighting future hybrid offerings. These new engines will be shown for the first time on the Perkins stand in Hall A4 Stand 336.

Perkins has invested in hybrid engine research and development. At Bauma the company is featuring a range of technologies that will add value to OEMs as they design the next generation of off-highway machines.

The hybrid-electric, hybrid-mechanical and hybrid-hydraulic power technologies being shown by Perkins complement the existing 0.5-18 litre range of diesel engines. 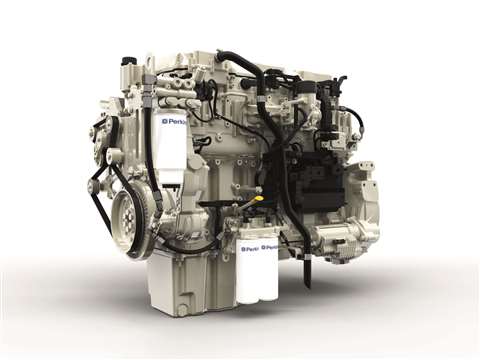 One of the engines Perkins will be displaying, the 2406J-E13TA

Highlighting the breadth of the range, the company is showcasing a four-cylinder 1200 Series, designed for the electric power market. The engine delivers 120 kVA and meets Stage V emission standards for mobile generators. At the larger end of the range, the 1700 Series is a six-cylinder, 9.3 litre engine offering 340 kW (456 hp), while the 2400 Series will be shown for the first time.

Volvo Penta will be showcasing its full range of engines, including the new Volvo Penta Stage V D5, D8, D11, D13 and D16 engines that offer power from 105 to 585kW.

Volvo Penta said its Stage V engine range for off-road applications had been developed with OEMs and end users in mind, delivering optimum productivity, uptime and total cost of ownership. 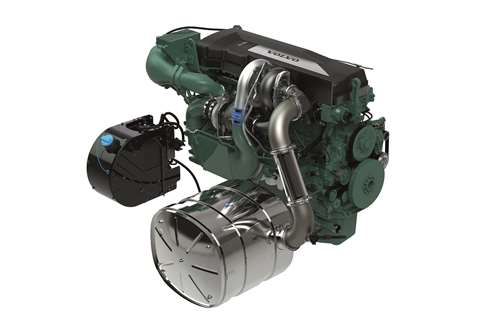 Volvo Penta has responded to the introduction of the world’s toughest emission regulation, Stage V for Europe, with a new range of engines that it said offered easy installation, operation and maintenance.

One major driver in the development of the new Volvo Penta Stage V range has been ensuring that the engines and exhaust aftertreatment system worked seamlessly together, it said. Among other benefits, this is said to maximise passive regeneration during normal operation and, therefore, to remove the need for stand-still regeneration, boosting customers’ uptime, productivity and profitability.

In the D5 and D8 engines specifically, Volvo Penta has decreased cooling requirements by around 20%, meaning the size of the radiator can be reduced or power increased depending on customer need.

It claimed two new clean burning and quiet industrial engine models in the 4TN88G – maximum output 45.0kW – and 4TN98G – maximum output 63.0kW. It also plans to introduce bi-fuel specification models that can run on both LPG and petrol.

Gas engines produce very little PM (particulate matter), it said, adding that they were comparatively quieter than diesels. It said this made them ideal for work indoors and in enclosed areas, where environmental concerns are a major consideration.