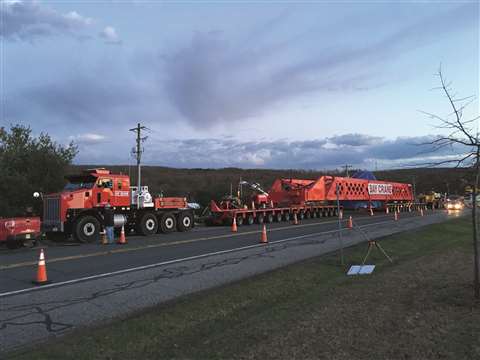 The HIP assembly and the steam turbine generator were transported suspended between the 400-ton capacity Bay Crane suspension beams supported by 32 lines of Goldhofer trailer.

“The barge vendor delivered the components to the Vulcan Materials Quarry at Havre de Grace, MD,” said James F. Radomicki, manager of Bay Crane Service of NJ based in Hillside, NJ. “At that point we offloaded the L.P rotor directly to Bay Crane’s 13-axle lowbed transporter using a 400-ton hydraulic crane. The HIP turbine assembly was transferred directly onto Bay Crane’s Goldhofer suspension beam trailer and the steam turbine generator was staged for storage on mats and beams for later load out.”

The 127,000-pound L.P. rotor was an oversized shipment requiring permits from both the states of Maryland and Pennsylvania. “We were required to have a state police escort the entire way, but this haul was relatively routine in that it was accomplished in a single day, without utility support or the need for mitigation of any underground structures,” said Radomicki. 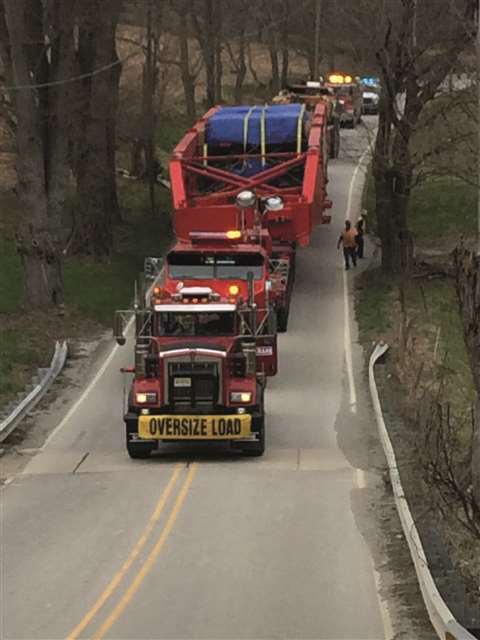 The largest component was a steam turbine generator that weighed 690,000 pounds and measured 39 feet long by 16 feet 10 inches wide by 13 feet 6 inches tall.

Hauling the HIP assembly and the steam turbine generator (STG) was a little more complicated. Those pieces were transported suspended between the 400-ton capacity Bay Crane suspension beams supported by 32 lines of Goldhofer THP-SL trailer.

“The extreme height of the HIP necessitated the unit sit between the suspension beams, allowing it to ride less than 6 inches off the ground at various points of the transport to avoid overhead structures, wires, signs, trees and other interferences,” he said.

The largest piece, the steam turbine generator, (STG), was received at the quarry and then transferred to a mat and beam foundation using a 4-leg 1,000-ton capacity hydraulic gantry.

“Prior to transport, the STG was then lifted by the 1,000-ton gantry and set into the Bay Crane suspension beam trailer for hauling to the Calpine site,” he said. “The combined gross vehicle dimensions for the STG were 185 feet long, 16 feet 6 inches tall and 20 feet 8 inches wide.”

The loaded out weight of the STG was a whopping 1,208,000 pounds. For both of the grossly oversize transports, the approved transportation route was 28 miles long. The state of Maryland requested a night move and the state of Pennsylvania requested day moves, forcing the Bay Crane team to find suitable layover areas to make the transition.

“We had to have the IH-95 closed for approximately 30 minutes to allow the loads to cross the highway via a median crossing,” said Radomicki. “The highway overpass was not capable of supporting either load. Bay Crane’s team also was required to plate over underground highway culverts or structures in seven locations using eight two-inch by 10-by-10 foot steel plates at each location.”

Another challenge was performing full bridge jumps of under roadway bridges at five locations including jumping bridges up to 45-foot clear span.

Radomicki said the hauls spanned three days each and necessitated renting a church parking lot for daytime staging between the transport days and nights.

Permitting required that each haul have a full-time highway traffic control crew to close and re-open highways as the transport passed. Also each transport needed dedicated plating and bridge-jumping teams, utility contractors from three local utilities and three communications firms. Plus there was the cooperation from both states police departments.

The Bay Crane transport crew included one supervisor truck, two escort trucks (one with a height pole), four state police troopers, three Bay Crane heavy duty tractors, four utility/phone/cable TV bucket trucks for overhead wires and a state highway engineer. In addition to the transport crew, the night moves required a full crew of ironworkers, tractor/trailers and a 100-ton capacity crane for placement of the temporary bridges and another full crew of ironworkers, tractor/trailers and a Gradall excavator to lay down the plates over the culverts.

Each transport, day and night, required approximately six work trucks with personnel to lay down and pickup detour/road closure signs, barrels and cones.

Each transport required a detailed permit from both states plus the city of Havre de Grace, MD and a contractual agreement with Vulcan Materials to use their facility for receipt of the cargo.

The state of Maryland requested a night move and the state of Pennsylvania requested day time moves, forcing the Bay Crane of NJ team to find suitable layover areas to make the transition.

Radomicki said from the initial contact with the customer, to contract agreement, through planning and engineering through final execution took about 18 months.

Three pull and push tractors were required due to numerous hills, some with grades of up to 15 degree inclines. The night-time transports were slow going and required two 10-hour nights. In Pennsylvania, the day time travel involved one 8-hour day. Safety was of the utmost consideration.

“Closely coordinating the closure of IH-95 was the biggest safety challenge for the team,” said Radomicki. “We had to coordinate efforts within the State of Maryland between the Maryland State Police the Maryland State Highway Administration and the Maryland Transportation Authority. Each had its own concerns and requirements. We were limited to a 30-minute closure, and thankfully we completed both trips in less than the allotted time.”

One other challenge the team had to overcome was crossing the 200-foot Deer Creek Bridge. The bridge was not capable of supporting the load crossing traditionally down the center. The transport team had to crab the load across the span, essentially crossing the bridge with the lead trailer in the northbound lane, and the load suspended diagonally to the rear trailer which crossed the bridge in the southbound lane. This effectively spread the load across all of the bridge girders, thus allowing the engineers to utilize all of the bridge component strength to gain approval for the crossing.