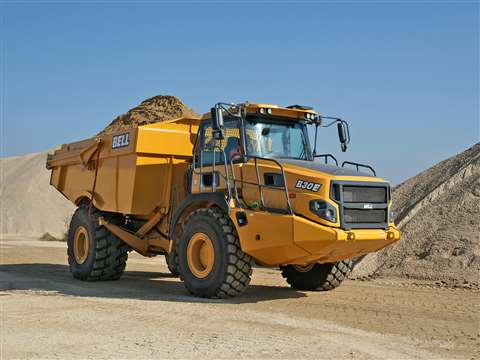 Bell Equipment said it was growing the four-wheel drive concept with the Bell B30E 4x4, which will be displayed at Intermat 2018, along with the Bell B40E earthmover, from the company’s 6x6 range.

The company said the Bell B30E 4x4 supplemented the company’s traditional 6x6 ADT range by providing a practical alternative to those customers who have had to choose between tipper trucks, rigid dump trucks and 6x6 ADTs. In addition to smaller quarry operations, the truck will also target specific markets, such as tunnelling.

Bell said that while not possessing the extreme off-road capabilities of a 6x6, the B30E 4x4 still offered “sound all-weather characteristics on undulating haulage roads and light terrain”, and claimed that it provided better manoeuvrability in confined material handling areas or stock yards.

Having one less axle means no tyre scuffing, it said, saying this resulted in significantly reduced tyre wear compared to 6x6 applications on hard ground.

In Paris, Bell will also present the B40E 6x6 ADT, which shares a common base with the larger B45E. It said this model’s 380kW Mercedes-Benz engine and seven-gear Allison transmission provided the foundation for the superior fuel consumption of the 40-tonner.

All Bell ADTs include the company’s satellite-based fleet management system, Fleetm@tic, which provides customers with detailed information which assist them to improve production, maximise utilisation and safeguard machine condition.