Berry was tasked to lift the fragile 12.5 tonne bus shelter from its roadside location, relocate it to a storage area half-a-mile away, and eventually return it to another location at the retail village. It had to be moved to accommodate important roadworks at its original position. 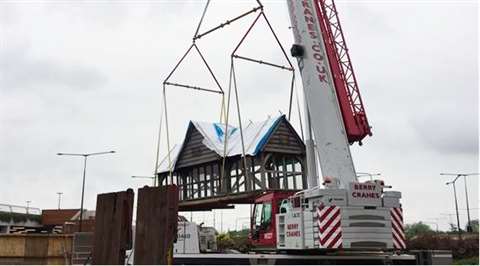 A Tadano ATF 70-G4 all terrain crane, a Modulift MOD 24, and two Modulift MOD 12 spreader beams were used to lift the bus shelter

The crane rental company chose a Tadano ATF 70-G4 from its 12-crane fleet, a Modulift MOD 24 spreader, two Modulift MOD 12s (used in a one-over-two spreader beam configuration), and a variety of other rigging equipment to complete the initial lift. The same equipment will be employed when it’s time to reposition the bus shelter in due course. The crane used 30m of main boom, which provided 22.8t capacity at 6m radius.

Greg Allen, contract lift operations manager at Berry Cranes, said, “The biggest issue was that the bus shelter was originally built in situ during the 1960s so no-one could know how stable it was until we lifted it. Further, the lift required extensive planning as the location gets extremely busy during hours when the retail park is open to shoppers.”

Berry provided a crane operator, lift supervisor and two riggers, while the client supplied a structural engineer and two carpenters. Special steel beams were manufactured and placed underneath the structure, creating a cradle for the load as it was lifted. Prior to delivery to site the beams were tested in accordance with Lifting Operations and Lifting Equipment Regulations (LOLER) 1998.

Before the lift, the ground was dug from beneath the bus shelter in two positions to allow contractors to slide two beams lengthways underneath the structure. Jacks were used to lift the large beams with the shelter sitting on them to allow four smaller beams to be slid widthways underneath the larger ones. Fabricators then installed lifting bolts onto the ends of the smaller beams to attach the shackles. 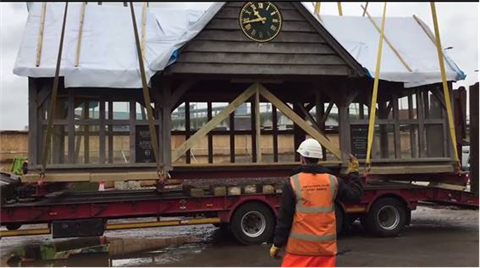 One-over-two spreader beam configurations are particularly common when there are four lifting points. However, in this case, Berry attached two slings at each of the four corners of the rig to connect to shackles and steel beams beneath the bus shelter.

Greg Allen concluded, “Combining expertise and quality equipment, we were able to complete the project safely and efficiently, only closing a small area of the car park to complete the lift and escort the load away from the site on specialized transport. We had previously lifted a 27t yacht with a MOD 50 [which can lift up to 50t at 8m or 26 ft. and up to 13m or 42 ft. at lower capacities] and regularly employ Modulift’s products, so we are familiar with the innovation they can facilitate below-the-hook of our cranes.”

Berry’s fleet, of which five are all-terrain cranes, includes Liebherr’s 100th UK-delivered 60t capacity LTM 1060-3-1 mobile that arrived in May 2017.