BKL heats up with Grove 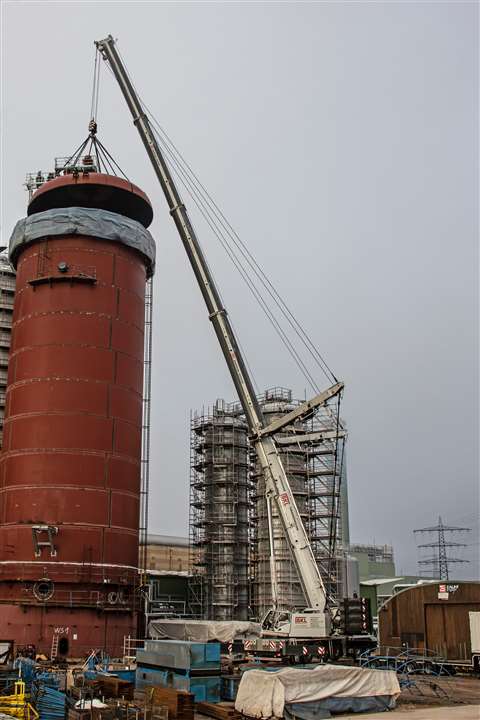 Crane specialist BKL chose a 400 tonne capacity all terrain crane to erect a storage tank as a crucial part of the construction of a power plant in Germany.

A Grove GMK6400 all terrain crane from BKL’s Frankfurt depot was put to work on the construction of a new heat storage system on Ingelheimer Aue between Wiesbaden and Mainz. It is part of a €100+ million combined heat and power plant being built on the site of Kraftwerke Mainz-Wiesbaden. Powered by natural gas the new plant will provide electricity and, as a useful byproduct, heat for a district heating system.

The last part of BKL’s job was to place the 35 tonne cover on top of the 36 metre high heat storage container. Total height after assembly was 43 metres and its diameter was around 12 metres.

Grove’s Mega Wing Lift attachment was fitted to the boom of the crane to give more power. “With the additional self-rigging Mega Wing Lift strength, our GMK6400 from the Frankfurt BKL fleet can handle enormous loads, which has proven to be a great advantage in placing the cover on the heat storage container,” a BKL spokesperson explained.

Jobs like this are usually done using seven or eight axle cranes, the crane manufacturer Manitowoc said, so being able to use the six axle GMK6400 and its 60 metre boom saved time and money. It was quicker to set up, easier to get permits for than a larger crane and less was needed in the way of logistical effort. The Mega Wing Lift kit increases lifting capacity on the main boom by up to 70 percent and by up to 400 % when using a luffing jib, the manufacturer said. 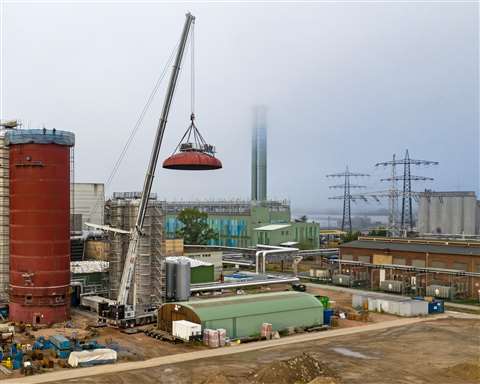