Versalift UK has promoted Andy Bray to the position of general manager with effect from 1 November.

He reports directly to Kim B. Jensen, the group managing director of Time Export. In addition to his promotion to general manager, Bray remains in his position as sales director. 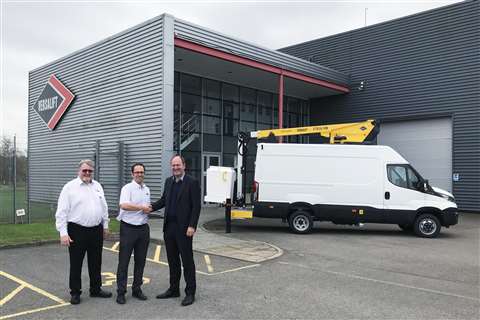 From left: Per Torp, Andy Bray and Kim Jensen.

Versalift UK is part of Time Manufacturing’s Export Division called Team Time that in addition to Versalift UK consists of Time Versalift SAS in France and Time Danmark in Denmark. Versalift UK is responsible for the sale and installation of Versalift products for the UK and Ireland plus product support, parts and training.

Bray joined the company in 2011 as regional sales manager for the North, selling a record number of the company’s van-mounted platforms. He was promoted to the position of sales director in March 2015 and has been integral to a continued period of growth in the UK and Irish market, in what is an increasingly competitive vehicle-mounted business, said the company.

Commenting on his new position, Bray said, “It’s an exciting time at Versalift UK and I am looking forward to the challenge of continuing to grow an already robust business, here in the UK. The new group structure will provide strength through effective collaboration and open communication between our three European companies, together with our parent company, Time Manufacturing in Waco, Texas”.