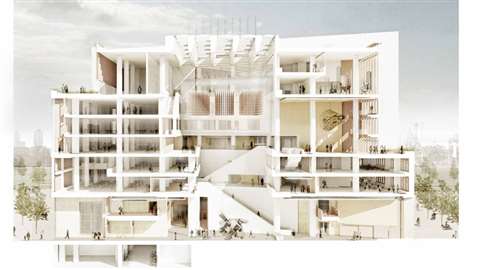 The building is planned to be the largest on the campus

UK-based contractor Mace has won a £200 million (€221 million) contract to build the largest building in the first phase of a new University College London (UCL) East campus on the Queen Elizabeth Olympic Park in London, England.

The pre-construction phase for Marshgate I begins immediately and will include an early review of the procurement strategy to secure project completion in 2022.

Construction of Marshgate I is expected to start in 2019, following completion of design and agreement of build costs. A phased opening of the building is planned from September 2022.

UCL East will be part of East Bank. Earlier this year, the Mayor of London, Sadiq Khan, set out the £1.1 billion (€1.2 billion) vision for East Bank. The scheme, which is receiving £385 million (€426 million) from the Mayor and £151 million (€167 million) from the Government, will provide skills and jobs for local people, bring more than 10,000 students to the site, and attract thousands of visitors.