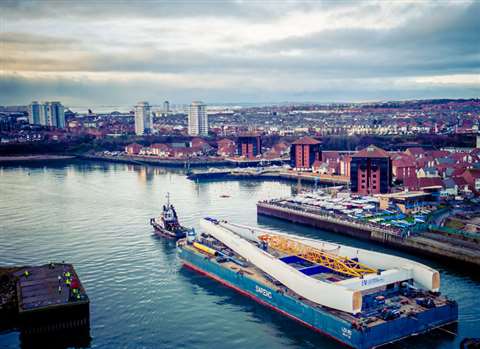 The pylon, arriving at the Port of Sunderland, will form the centrepiece of the New Wear Crossing

The 100m centrepiece for a new bridge in Sunderland, in north east England, has arrived at the Port of Sunderland.

The white structure, which is constructed from more than 1,000 tonnes of steel and 550 tonnes of concrete, was met by harbour tug boats from the north east, about a mile off the port entrance, and then towed past the Roker and New South piers before berthing at Greenwells Quay.

It will be moored at the port for several weeks while final preparations are carried out, before it is transported three miles up the River Wear to the site of the new bridge between Pallion and Castletown.

The pylon will form the centrepiece of the New Wear Crossing, which is planned to open in the spring of 2018.

The new bridge will link Castletown to the north of the River Wear with Pallion to the south, and will have dual two-lane carriageways for vehicles, as well as dedicated cycle and pedestrian routes.

It is intended to enhance public transport, as well as improve the transport links to the city centre and Port of Sunderland from the A19 and A1 roads.

Victor Buyck Steel Construction has spent the last year fabricating the pylon at its yard in Ghent, Belgium. The steel structure was loaded out of the fabrication yard and transported to the Port of Ghent in a carefully orchestrated operation that took several days to complete.

The bridge is being built on behalf of Sunderland City Council by Farrans Construction and Victor Buyck, as the FVB joint venture. The transportation of the pylon was carried out by Sarens, heavy lifting and engineered transport specialist.

Carl Sarens, technical solutions and engineering director, said, “Sarens handles heavy and complex cargo worldwide, but being involved in the transport of the pylon, and then the raising of it on site in a few weeks’ time, is extremely complex and has required detailed in-house engineering expertise, working in close collaboration with the Farrans Victor Buyck team.”

He said the first challenge was slowly manoeuvring the pylon out of the fabrication yard and onto the two canal barges, which was a slow process because the ballast of the barges had to be carefully adjusted throughout the operation.

Then it had to be taken along the canals, under a series of low bridges, and into the Port of Ghent, where it was transferred to a larger, sea-going barge.

“We are delighted to have brought the pylon to Sunderland. It is a magnificent structure, so we are looking forward to seeing it raised into place,” he said.

The next milestone in the bridge project will be the transportation of the pylon up the river to its permanent new home between Castletown and Pallion.

The transportation will be timed to coincide with the high tide and will be a precise process, with the Louis barge that has transported the pylon across the North Sea accompanied by tugs as it makes its short journey to the site.

Once it is in location at the construction site, and final checks have been made, it will then be raised into position at the centre of the new bridge, standing 105m above the River Wear.