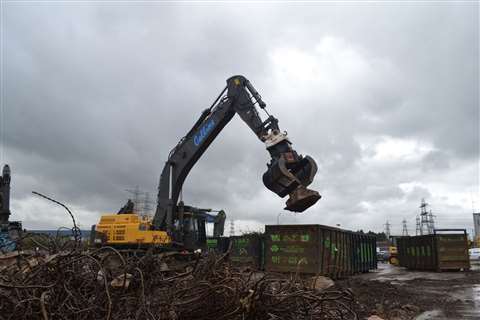 This is home to the former Hams Hall power station, originally built in the 1920s. The final stage was completed in 1958 and once boasted 13 cooling towers. Collins has the contract to complete the ground remediation.

A range of hydraulic attachments are available for use on the site for the Volvo machines, both of which have had the OilQuick OQ90 quick coupler and attachment brackets installed by ECY Haulmark.

The attachments in use on the site include a 3.8 t VTN MD610 selector grab and a 8.7 t VTN FP70 rotating concrete processor, also supplied by ECY Haulmark, as well as a variety of hydraulic breakers and buckets.

Collins Demolition director Scott Craddock said: “The two machines have been a brilliant addition to the demolition fleet.

“Having OilQuick fitted to the excavators improves health and safety for our operators and site personnel, machine productivity is increased, and downtime suffered by operators having to make a manual attachment has now become a thing of the past.

“I will definitely be looking into converting the remainder of the demolition fleet to OilQuick in the future”.