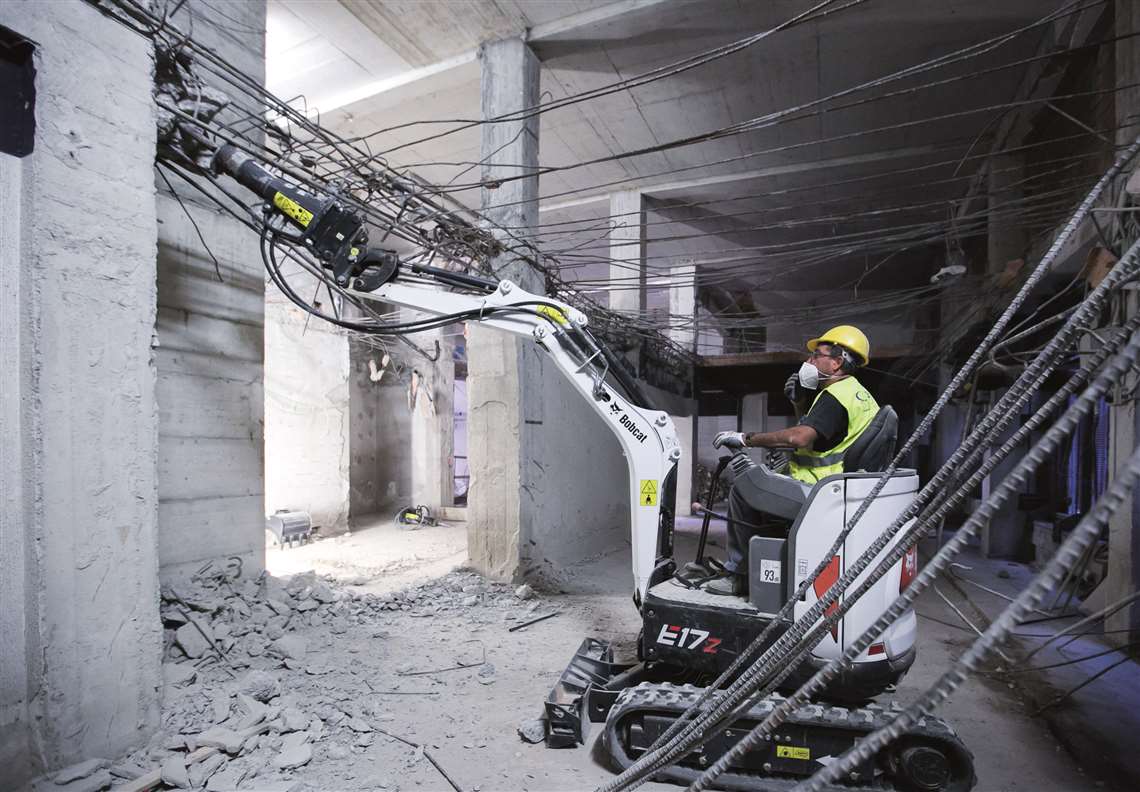 Seli Manutenzioni Generalil used the Bobcat with hydraulic breakers for the precision demolition of a building in Milan, Italy

Europe saw sales of just over 70,000 units. According to market analyst Off-Highway Research, before the pandemic over 30,000 mini excavators in the 0.8 to 2.0 tonne weight class were sold in the region, along with just over 25,000 machines in the 4.1 to 6.0 tonne range.

Chris Sleight, the company’s CEO, told CE, “Our research suggests that between 55-60% of mini excavator sales in Europe are to rental companies. That’s up from just over 50% ten years ago. Contractors are the next biggest group, accounting for about 25% of sales at the moment.”

While OHR’s provisional research indicates sales of mini excavators across Europe have dropped by around 20% in 2020, sales are forecast to rise again in 2021.

However, with both Covid-19 and environmental regulations impacting the construction industry, the ability of small and medium-sized contractors to diversify their scope of work is likely to be viewed by many as essential in navigating today’s rapidly changing industry.

Regardless of whether companies decide to increase or decrease the types of projects they take on, machine versatility – in addition to the cost – is a vital factor when choosing a mini excavator to purchase or rental.

Bobcat’s E45 excavator is equipped with a proprietary Depth Check system, allowing operators to dig to a depth without an engineer setting a laser line

One of the most common uses for mini excavators is indoor demolition work and machines in the 1 to 2 tonne weight class offer a level of versatility that can be particularly useful when operating inside buildings.

Bobcat’s 1.7 tonne E17z compact excavator model, which is equipped with a Stage V Kubota D722-E4B diesel engine offers zero tail swing. This means operators can rotate a full 360 degrees when working near walls or other objects.

Offering a reach of 3.9m, the model also incorporates a hydraulically retractable undercarriage and available with a demolition package option.

Two of the E17z machines and a Bobcat E10z model, which has a retracted width of just 71cm, were recently used on a demolition project in the centre of Milan by the construction division of Italy-based company Seli Manutenzioni Generali.

Demolition of the five-storey building had to be carried out without damaging the adjacent buildings and without disturbing nearby residents.

Ivano Perego, sales manager at Seli, says using the compact machines allowed them to “provide a guarantee to the customer that the job would be carried out with maximum efficiency and precision”.

The company used mini excavators equipped with breakers and other attachments for the precision demolition of the building’s floors and other structures, to make way for new stairwells and lift shafts. The contractor also used one of the E17z mini-excavators in its top-down mode to demolish a roof to create new floor levels for the building. 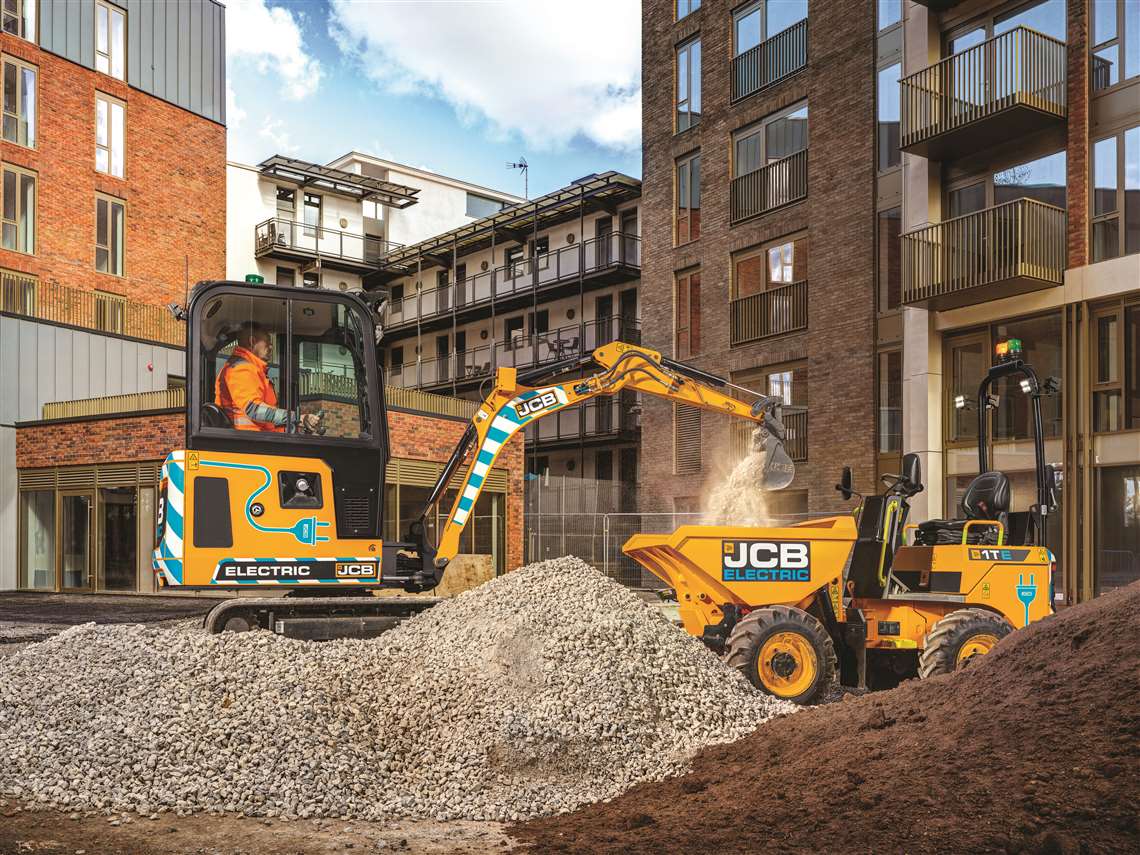 According to Bobcat, the E10z model’s fold-down tip over protective structure (TOPS/canopy), also means that operators can pass through low openings, doorways or under branches to reach difficult to access work areas.

While Bobcat’s E17z and E10z are well suited to indoor demolition, JCB’s new 19C-IE mini excavator is set to provide operators with more comfort when working outside, thanks to a new fully glazed E-TECH cab option.

With a maximum digging depth of 2.8m and an equivalent dumping height, the cab option means operators in countries with colder and wetter climates can use the 1.9 tonne model in less than ideal weather conditions.

JCB says, “The addition of a cab option will increase the appeal of the 19C-1E in Nordic countries and in territories with poor weather conditions, where a canopy is not suitable.”

The E-TECH cab offers the same amount of space as JCB’s diesel machines of the same weight class. It is fitted with an electric heater that operators can use to warm the cab and demist windows, without impacting the mini excavator’s digging or tracking performance. 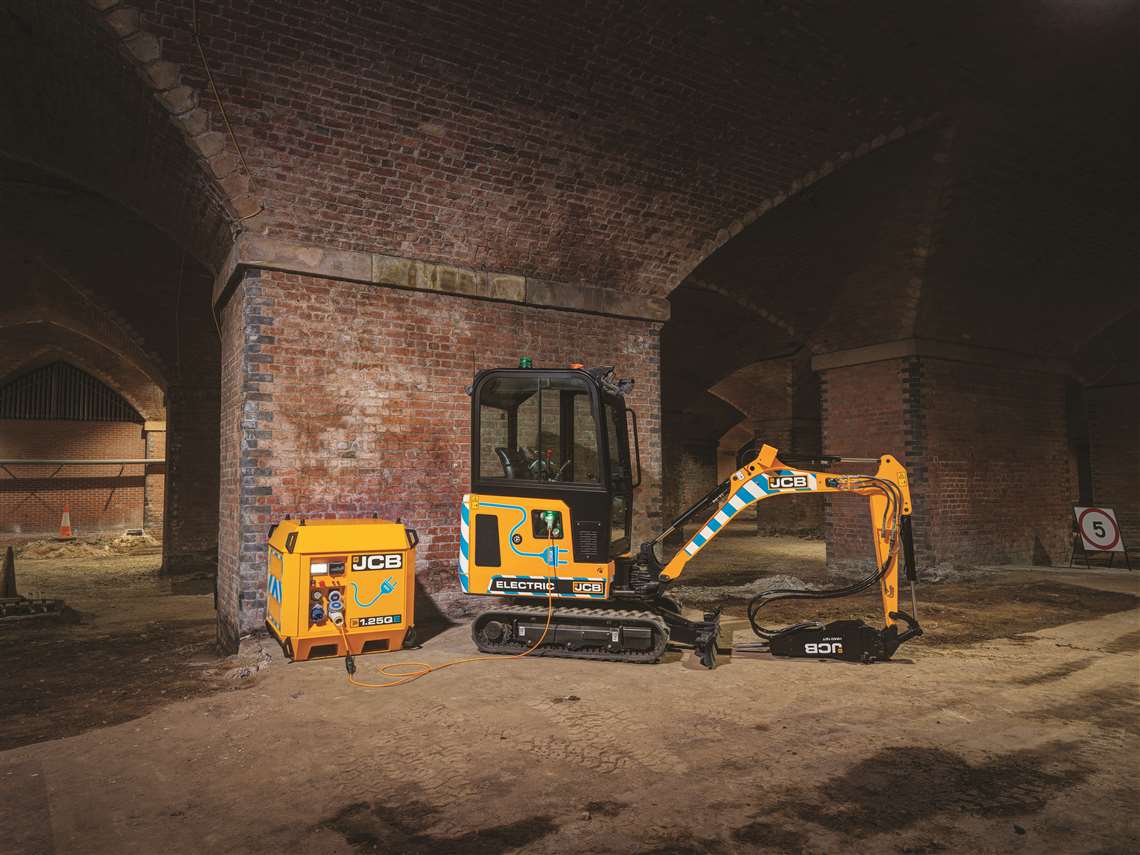 While the front windscreen has a 70/30 split with a clear joint that gives an unobstructed view of the work area, the glazing itself is made of a laminated flat glass material, which the manufacturer says is straightforward to replace. The cab also uses the same LED working lights and wipers as its diesel counterparts. This provides improved visibility for working at night, in poor weather conditions or inside dark buildings.

Alongside providing a warm and dry environment for operators, the cab also has a locking door for added security, which will appeal both rental and construction companies.

Described as the first to be offered with a fully glazed cab, the 9C-IE is part of JCB’s new E-TECH generation of electric products. It has four lithium-ion batteries that give operators five hours of use on standard applications and is available with a choice of either 110V, 240V and 415V charging options.

A winner of the UK’s Royal Academy of Engineering MacRobert Award for innovation, the 19C-IE includes the manufacturer’s LiveLink telematics system and its 2GO safety system, which isolates the controls to stop the machine moving accidentally.

While JCB’s cab option means contractors can work for longer in weather conditions that would stop the use of a machine with an open-air cab, the low noise levels of Wacker Neuson’s EZ17e mini excavator means night-time and inner-city projects can be undertaken with less disturbance to local residents and businesses. 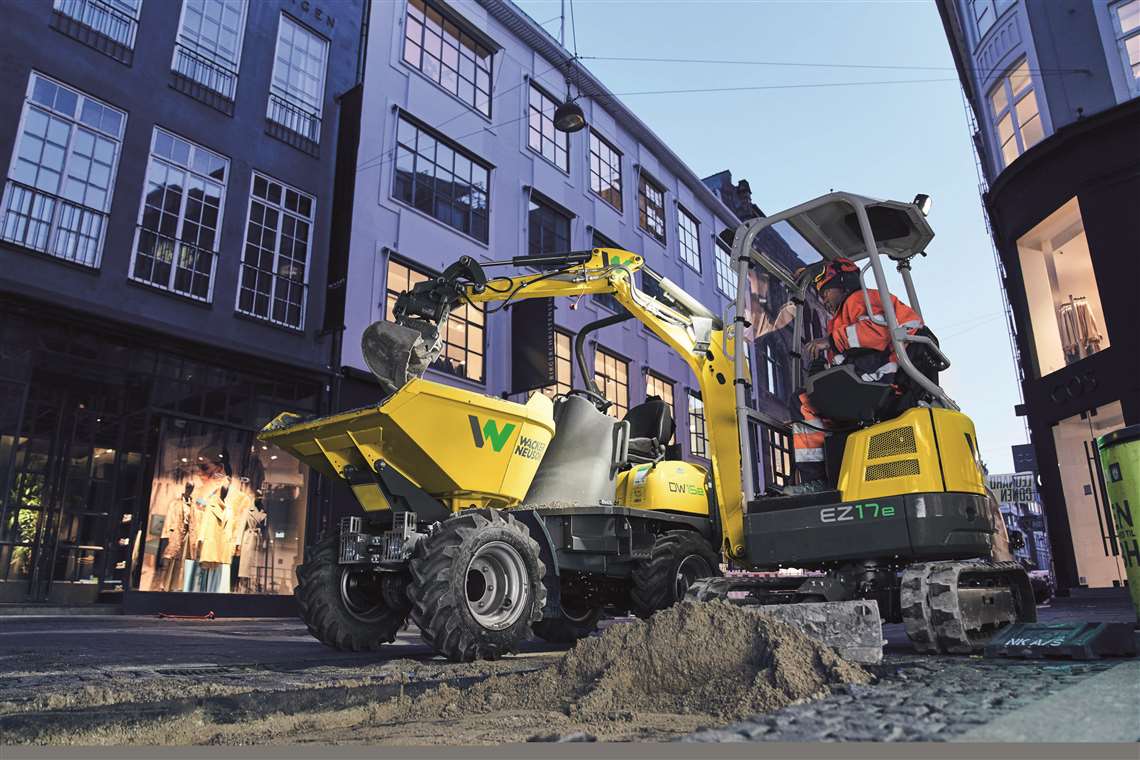 The EZ17e mini excavator was one of an entirely zero-emission machine fleet on a project in Copenhagen, Denmark

A case in point is Wacker Neuson’s EZ17e mini excavator, which was just one of an entirely zero-emission machine line-up on a recent project in the centre of Copenhagen, Denmark.

The project involved laying new cables in a pedestrian zone and was carried out both at night and in the early of hours of the morning, to minimize disruption to businesses and residents. It required equipment capable of quiet operation and the EZ17e – the manufacturer’s first electric mini excavator – was one of the emission-free machines chosen for the project.

The model, which has a 48V lithium-ion battery that can be charged via a 110-230V household power outlet during operation, was used to break up paving stones and excavate soil.

According to Wacker Neuson, the model’s low sound level of just 84dB meant that “no noise emissions of any kind produced by the zero-emission products – only garbage trucks with conventional engines driving past produced measurable values”.

Alexander Greschner, chief security officer at Wacker Neuson Group, says, “Due to the intensifying question of emissions, in particular within the inner city area, and increasingly economical solutions, we are seeing an increasing demand for emission-free solutions.” 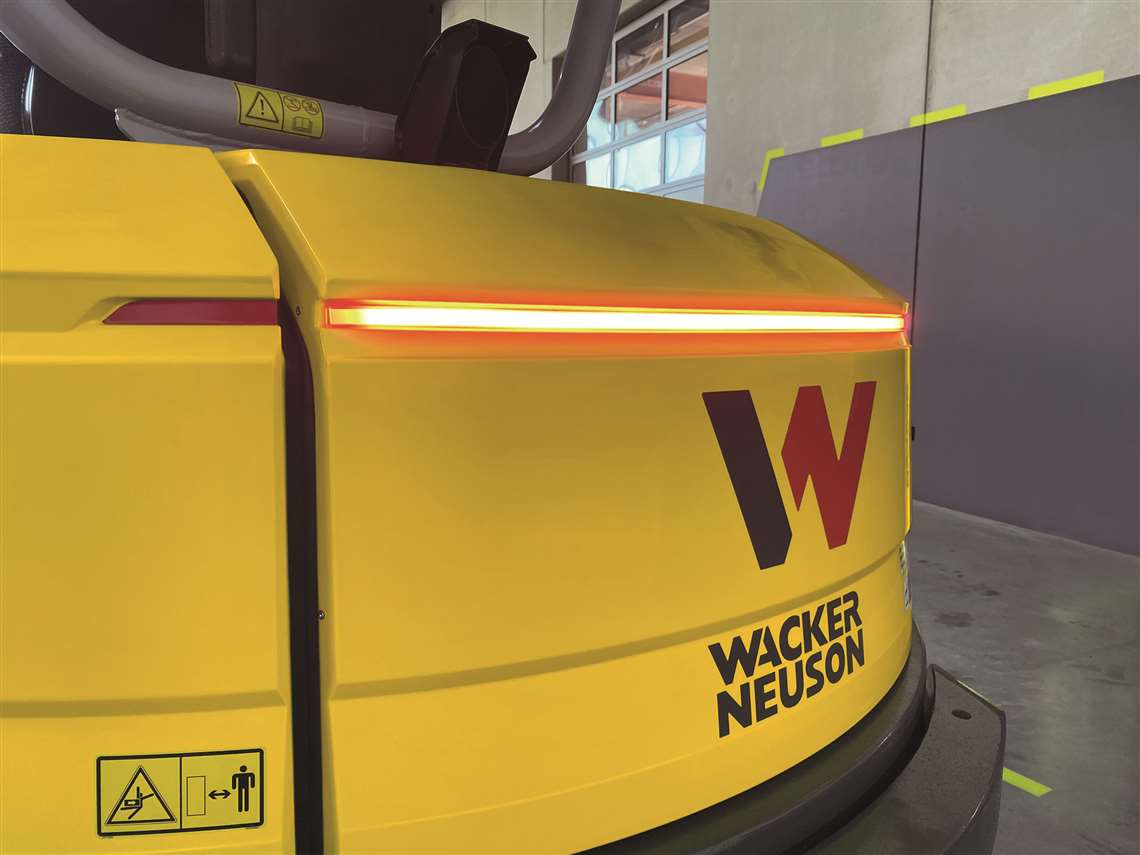 The ET42 includes Wacker Neuson’s new Active Working Signal for improved safety. The red LED strip lights up to let other site workers know the machine is in use

While the low noise and low weight of the EZ17e means it can be used both outside and indoors, the manufacturer’s heavier Stage V compliant ET42 mini excavator is suitable for more demanding applications.

The model includes the 3-point kinematics system of the manufacturer’s larger machines, giving it a breakout force of 43.8kN. It also provides operators with a greater digging depth than smaller models, for work on rocky or stony ground and for excavating near walls.

Stefan Bogner, managing director of Wacker Neuson Linz, says, “In designing the new mini-excavators, it was important to us to develop compact machines that are easy to handle, impressive in their performance and in keeping with the latest technological developments.”

The ET42’s lifting arm cylinder has a piston rod protector made of a synthetic elastic material that reduces the likelihood of damage and lowers related repair costs.

Adding to its versatility, the mini excavator’s four auxiliary control circuits allow it to be used with a range of attachments, which operators can change quickly without leaving the cab using a new pressure release switch. External track rollers and conventional tail swing also mean the ET42 offers a high level of stability when lifting heavy loads.

While many may wish for more stability in today’s construction industry, the versatility offered by mini excavators has never been greater. Whether buying or renting equipment, the wide and diverse range of mini excavators now available in Europe will no doubt be of benefit to construction companies as they steer their businesses through the pandemic.

JLG plant recognized for energy management
JLG’s Shippensburg, PA facility has been recognized by the U.S. DOE as a 50001 Ready site