Construction is set to begin on the US$1.4 billion Thirty Metre Telescope (TMT) in Hawaii, US. The TMT is being built by an international collaboration called the TMT International Observatory, which involves astronomers in Japan, China, US, India and Canada. 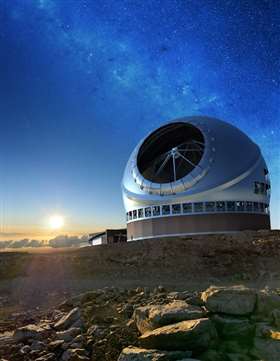 An artist’s impression of the TMT

It is proposed that the TMT will be built on the 4,267m high summit of a dormant volcano where the absence of air and light pollution is said to improve observation.

With its 30m mirror diameter, the TMT will be three times as wide, with nine times more area, than the largest currently existing visible-light telescope in the world. The mirror will have 492 segments of reflective glass pierced together.

It is estimated that the TMT could take ten years to build.