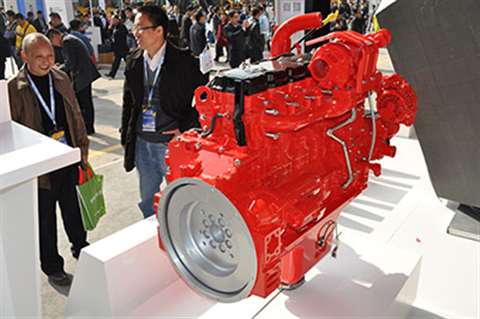 Cummins has released its latest engines for the construction market that have potential fuel savings of between 15%-20% on previous models, according to the company.

The QSB7 6.7 litre and QSF 3.8 litre units were launched at Bauma China, Shanghai this week, which have drawn from an existing line of engines specially adapted for the Asian market.

Both engines comply with China’s soon-to-be introduced Stage III emissions regulations and are expected to have broad application across the construction market.

The 6-cylinder 6.7 litre engine is aimed primarily for excavators between 20-30 tonnes. It features electronic controls for its high pressure commonrail fuel system and delivers between 160-215hp.

Meanwhile, its 3.8 litre counterpart is a 4-cylinder model pitched at excavators and loaders of up to 17 tonnes.

Stephen Saxby, Cummins’ director of engineering, believed the new engines had significant potential within the excavator and wheeled-loader market within China.

He said, “The QSB7 is from the B family of engines that we have made for many years and manufacture around the world and is now being manufactured in our Chinese facility for the market there.

“The engine has been in use for around 10 years successfully in Europe and the US and is now had modification for the Chinese market. We have been getting some good feedback with tests showing that it can produce 15-20% lower fuel consumption.

“Its introduction fits with our strategy for China known as FFM (fit for market) that works through a recognition that equipment works different within different markets, where varying regulations are in place.”