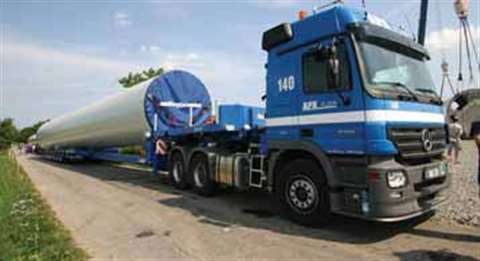 An investment by APB-Plzen in the Czech Republic sees the addition of six Nooteboom Mega Windmill Transporters to its heavy transport fleet. Each new trailer is a combination of a three axle jeep dolly, two lift adapters and a seven axle NLD type self-steering dolly.

One of these combinations has a five axle Nooteboom-Scheuerle FlatCombi modular trailer instead of a self-steering dolly. In addition, Nooteboom supplied 24 modular Eurocombi axle lines, manufactured by alliance partner Scheuerle, complete with adapters and goose necks. Using this new equipment a total of four transport combinations can be put together in a configuration of goose neck plus three axle line EuroCombi plus adapter plus five axle line EuroCombi.

Up to 24 axle lines can be coupled together for ultra-heavy transports. The adapters consist of two sets of load floor adapters and two sets of tower adapters. All trailers have been delivered and are in full operation.

Netherlands-based Nooteboom is widely known as a total supplier, setting the trend in the wind turbine transport sector. The manufacturer says it has gathered extensive expertise over the years in the transport of wind turbines and is supporting new techniques and methods for its customers.

This was a primary reason why APB-Plzen decided to award the order for the new trailers to Nooteboom, according to a company spokesman. Hesti Trailers, Nooteboom distributor in the Czech Republic, and the Hesti service organisation, also played an important part in this process.