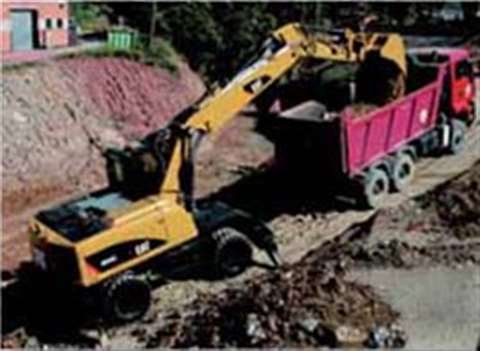 Five new wheeled excavators replace C series machines, the M313D, M315D, M316D, M318D and M322D, which offer improved lift capacity and faster cycle times as a result of changes to engines and hydraulic systems, says the company. This is achieved through the use of Cat ACERT engines (C4.4 for the M313D and M315D, and C6.6 for the M316D, M318D and M322D, with power outputs from 95 to 123 kW), the addition of a dedicated hydraulic pump for the swing function and a heavy lift mode that boosts lift capacity by 7 %.

As with the wheeled introductions above, the new Cat C6.4 ACERT engine fitted to the new units, with a net power of 110 kW (148 hp), and increased hydraulic pressure provide increased breakout forces, lift forces and drawbar pull. The new machines also feature the heavy lift circuit now standard on all D series machines.

The C6.6 provides 15% greater power for the 953D over the C series model it replaces, and 25% where the 963D is concerned. Advanced electronic control, precise fuel delivery and refined air management results in high performance and lower emissions, says the company.

Both machines feature a new load–sensing electro–hydraulic implement system that provides only the required work flow to the work tool and lift arms to allow more power for the tracks when required, along with increased fuel efficiency.