The 653 students who attended the November 15th Lift & Move USA event hosted by Deep South and Berard in Baton Rouge, Louisiana, made it one of the largest events held since the careers program was launched in 2015.

High school and college students from around Louisiana attended to learn about job opportunities in the crane, rigging and transportation fields. 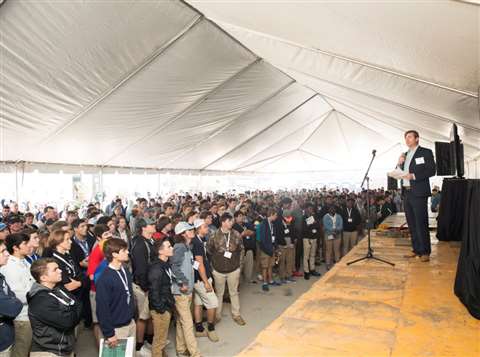 Brett Berard speaks to students at the start of the Lift & Move USA event in Baton Rouge, LA.

As the final headcount came in, a sense of industry pride could be felt across the grounds of the Deep South headquarters in Baton Rouge.

“I thought it was a great event”, said Jeremy Landry, project manager, Deep South, “We had some people who were really interested. I was walking around and I could see in groups of 60, those 10 people who were really interested. And if we get a sixth to really pay attention, I think it was a success. You couldn’t expect 653 high school students to come out here and be on point for two hours. I think it went really well. It was well received, and overall, a perfect day.”

Students rotated throughout the Deep South property across 10 different stations, each showcasing a different facet of the industry. The high schoolers had the opportunity to speak with engineers, welders, crane operators, and more.

Todd Marchand, an operator speaking at one of the stations said, “When you were little you probably had Tonka trucks, this is just playing with toys on a larger scale.”

Garrett Banta, an engineer with Deep South, described it as a great day; “All the kids were very engaged and everything was running very fluidly. The stations were also very diverse.”

Brett Melvin, executive director of Lift & Move USA, put the event in the wider context of the educational system in the USA; “In the last 30 years, the education system has migrated from a system that prepares students for life as adults, to one that prepares them for college. College can be a great stepping stone in life, but alone, it is not an end result.

“Too many young people today do not have even the basic skills to build a birdhouse, fix a water faucet or change out a light fixture. We have a society that places a priority on book sense, at the expense of common sense. One without the other will not yield a positive outcome.”

At the conclusion of the day, several $1,000 training scholarships were awarded by ATS, in addition to a drawing, and another cash prize for social media posts throughout the day’s event. Students were encouraged to share their thoughts on the day’s events on Twitter, Facebook and Instagram.

Lift & Move USA is a joint initiative by SC&RA, KHL Group, NCCCO and the SC&R Foundation. If you are interested in hosting an event, contact executive director Brett Melvin (e-mail: brett.melvin@liftandmoveUSA.com). 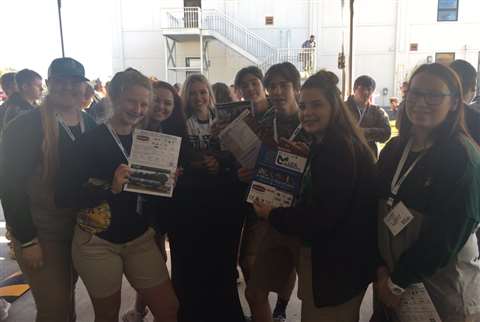 Students at the Lift & Move USA event hosted by Deep South and Berard.