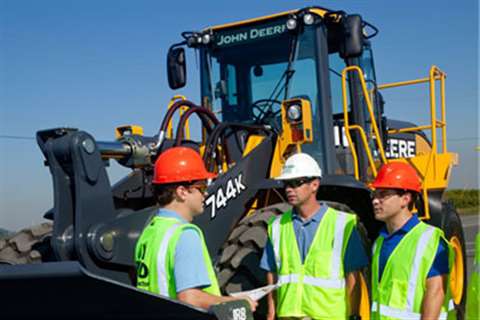 John Deere has sold its first wheeled loader fitted with an engine complaint with the forthcoming Interim Tier 4 (IT4) emission laws. The 304 hp (227 kW) 744K was bought by New Jersey, US-based contractor J. H. Reid, which needed the lowest emission machine available to be able to bid for work in the New York metropolitan area. IT4 laws for this size engine do not become mandatory in the US until the start of next year.

The first project the machine was used on was a US$ 125 million bridge project in the New Jersey coastal town of Highlands. However, this month will see it moved to a waste transfer station in Brooklyn, New York, where the New York City Best Available Control Technology emissions laws are now in effect, requiring contractors to use the cleanest machines possible.

Eric Reid, president of J. H. Reid said, "The bridge job is just a dress rehearsal. The loader is supporting us right now by working around the crusher with a bucket and carrying construction materials around the site with forks.

"Everybody knows IT4 is the future. For us it's all about the ability to work in new York City, and I didn't want to invest in something that would be obsolete in six months. Deere's IT4 availability allowed us to think long-term."

The 744K features a 9 litre John Deere PowerTech engine, which was certified by the US Environmental Protection Agency (EPA) in March as achieving compliance with the IT4 regulations. The engine uses exhaust gas recirculation and a diesel particulate filter to achieve compliance.