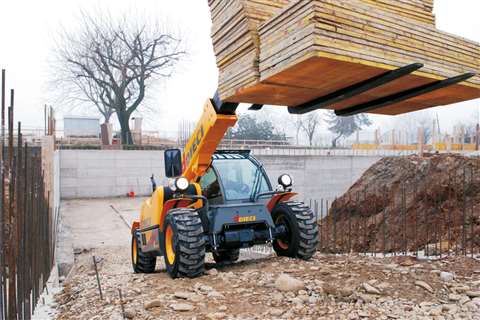 Italian manufacturer Dieci has redesigned its Apollo 25.6 fixed boom telehandler, with a new door and engine cover, while it has also added a new model to its Samson range.

The Apollo 25.6 is a mini-elevator which the company said had been created to meet the needs of small-scale work. It is designed for difficult and confined spaces such as cellars, car parks and basements.

It is fitted with safety devices and a ROPS/FOPS-approved cab, with adjustable seats and steering wheels, and enlarged glass surfaces for maximum visibility.

The Samson range is being expanded with the introduction of the Samson 65.8. It is described as compact and lightweight, and especially suitable for loading and unloading of materials thanks to an innovative bucket. This has tilt angle of 146° instead of a more usual 126/127°.

The Samson 65.8 can be equipped with two types of transmission - the Vario system with three driving modes of automotive, loader and creeper, or hydrostatic transmission.

The machine is equipped with an Iveco FTP 4485cc turbo aftercooler 93kW engine.