Germany-based construction business FW Bau has used a Doosan DX255LC excavator to dismantle a concrete tank at a sewage treatment plant in Schleswig-Holstein. 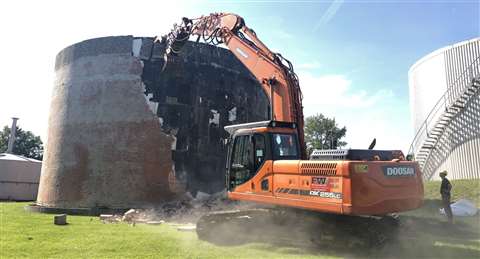 FW Bau, using a Doosan excavator supplied by Atlas Hannover Baumaschinen, dismantled the tank a week ahead of schedule

The company, which bought its first DX255LC two years ago, now has five Doosan machines in its fleet from authorised dealer Atlas Hannover Baumaschinen.

In the end, the job was completed in two weeks.

While the 25 t DX255LC was demolishing and processing material with the help of a jaw crusher, a Doosan 14 t DX140LCR-5 excavator loaded into FW Bau’s own trucks.

“Atlas Hannover Baumaschinen recommended the Doosan to me and the complete package consisting of the Doosan machine and the dealer as a service partner has proven itself.

“If there is a problem the most important thing for us is to first ensure that the work can continue.”