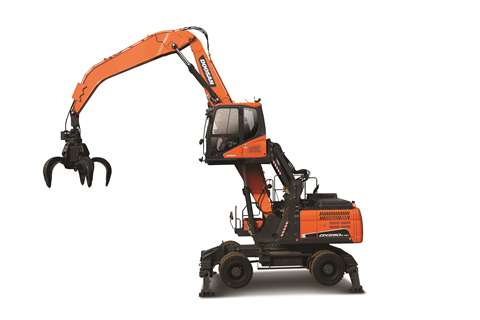 Doosan has launched the DX250WMH-5 wheeled material handler, which is specifically designed for demolition and recycling.

The machine features a hydraulic cab riser, front and rear stabilisers and four power modes. Weighing 25 t the new machine is heavier than its predecessor, the DX210W-5 however, manufacturer Doosan said its boom and arm were engineered for the toughest tasks and that the machine is better suited to activities in the solid waste, scrap metal and recycling industries.

The handler also features Doosan’s Smart Power Control (SPC). A system that it said improves efficiency by automatically adjusting rpm (revolution per minute) through speed and torque control, in response to the load being carried. The company added that its SPC system is fully operational with the model’s four power modes and that the six-cylinder water-cooled engine met Stage IV regulations, making the handler low cost to run.

In an interview with KHL last autumn, Doosan said the company’s focus was to provide more special application machines, a range of attachments, and to cope with a wider range of local market requirements.