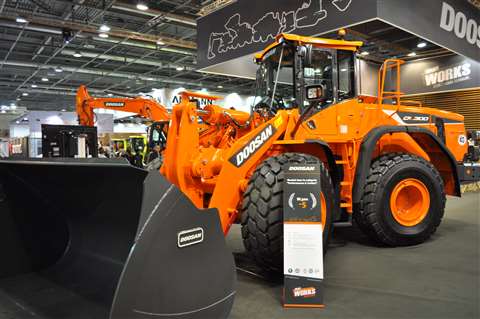 Doosan has launched its latest series of Stage IV compliant DL-5 generation of wheeled loaders at Intermat in Paris, which claim fuel savings of up to 10% over previous models.

Two further models, the DL450-5 and DL550-5, have also been added at the top of the range. These are said by the company to deliver greater fuel economy, productivity levels and operator comfort, compared to previous machines.

The series has the company’s new web-based CoreTMS wireless fleet monitoring system as a standard feature to monitor machine performance. The machines' load-sensing hydraulics are also said to have been upgraded to improve operating efficiency. Doosan said it had developed the range's latest joystick cab controls to easily combine several movements at the same time.

There is also a boom kick-out function as standard to control bucket settings, a load isolation system that has been developed to help provide an easier ride under rough terrain, and a third function to power a hydraulic system on a work tool.

The company said it had placed a high priority on operator comfort with the design of the series’ new cab, which includes improved headroom, better visibility and redeveloped steering column. There is also a 5.7 inch full colour display screen to enable working either during the day or night.