Georgia Ports Authority (GPA) has approved projects to expand the rail and gate capacity of the Garden City Terminal of the Port of Savannah, in the state of Georgia, US. 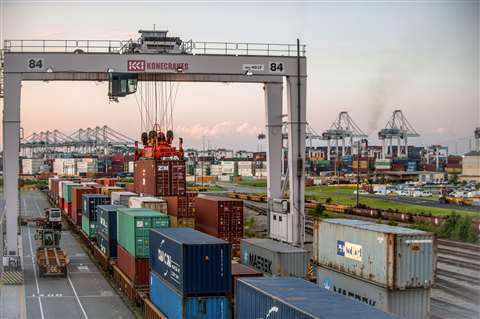 The US$128 million Mason Mega Rail project is set to double rail lift capacity at the Garden City Terminal of the Port of Savannah, in the state of Georgia, US

Said to be one of the largest container terminals in North America, containerised trade for October was reported to have grown by 32%.

As a result, the GPA board recently approved expenditure of $42.27 million as part of its $128 million Mason Mega Rail project, which is intended to double rail lift capacity at the terminal to 1 million containers per year and position the Port of Savannah to quickly increase service to an arc of inland markets, from Memphis to Chicago.

GPA executive director Griff Lynch said, “A strong southeast US economy, on-terminal expansion, and investment by private logistics firms throughout the region have resulted in phenomenal growth for Georgia.”

In addition to record container volumes, it was reported that total tonnage for all terminals climbed by 25%, from 2.36 million to 2.9 million tonnes.

The board also approved a $13.2 million project to expand the existing Gate 8 at the Garden City Terminal.

It was said that the addition would help the GPA absorb future growth and offer a better link to the Jimmy Deloach Parkway. It will expand the terminal’s gate infrastructure by 12.5%, providing a total of 54 truck lanes.

Lynch said, “In addition to expanding capacity, we will also reduce the impact on our local community. The new pre-check lanes will reduce truck congestion and the Mega Rail Terminal will significantly reduce or eliminate rail crossings.”

Construction is slated to begin in December 2017 and be completed by the end of 2020.