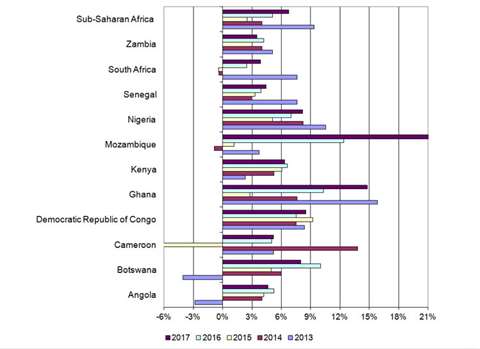 The construction outlook for sub-Saharan Africa is among the strongest in the world, due to robust economic growth. The region ranks second in GDP growth, behind only Asia, (excluding Japan).
While growth will be slower at around +3.8% this year, compared to the past several years, IHS forecasts an improvement to nearly +5% in 2016 and above +5% for 2017 and beyond as revenues from commodity exports recover.

Falling oil prices have brought mixed results to the region, hurting oil producers such as Nigeria, Angola and Mozambique, while helping oil importers such as South Africa and Zambia.

However, poor infrastructure (especially power generation), political instability and corruption impede progress in many countries. And while economic management has improved, the legacy of large fiscal and current-account deficits remains, and regulatory policy continues to hinder growth by creating challenging business environments.

There is concern that improving prospects for financial return in safer markets leaves sub-Saharan Africa vulnerable to capital flight. Combined with the slowing pace of globalisation, the implication is that strong growth will return, but not at the rates seen for much of the past decade.

While IHS has expanded the Sub-Saharan African coverage in its Global Construction outlook, it remains problematic to compare many countries given the quality of reported construction data. Business fixed investment tends to correlate highly with construction spending and is a reliable proxy. The chart shows the outlook for this metric.

Angola has one of the weaker construction outlooks, although it will feature marginal improvement. Low oil prices have shifted fiscal policy toward a more restrictive stance, leaving little room for fiscal stimulus, while a weaker currency will erode household spending and residential investment.

The recycling of oil revenues through the economy by means of government backed building programmes and industrial efforts is responsible for most of the growth of Angola’s non-oil economy, and slowing public works investment due to falling oil revenues will lead to further deceleration.

The government’s plan to increase oil production to 2 million barrels per day has been shifted from 2015 to 2017, but assuming a recovery in oil prices, new investment should rise in the outer years of the forecast.

While Cameroon is a marginal oil producer, oil income accounts for around 30% of government revenues. Maturing fields and technical issues have put oil production on a declining trend, compounding the issue of low oil prices.

Cameroon’s planned public spending on critical infrastructure projects, and the expected output rise in its construction and forestry sectors will be major contributors to economic activity. In the medium term, the energy and water sub-sectors are likely to be among the economy’s more vibrant, as public and private investors step up investment to help close the energy gap.

The Democratic Republic of the Congo (DRC) will also see slowing near term growth, in this case due to difficulties in maintaining the mining industry’s expansion rate amid lower commodity prices, particularly of copper, and an electricity shortage.

Multiple tax and concession disputes with foreign oil and mining companies have exacerbated concerns about the business environment within the DRC, which could impair foreign investment inflows. Strong international financial support, especially from China, should help the DRC weather these pressures.

The moderation in oil prices is hurting government spending in Nigeria, and the recycling of oil revenues through the economy will pare growth. Oil and gas exports account for around 70-80% of government revenues, but only around 15% of GDP.

Housing is set for gains. Although Nigeria lacks any substantial mortgage underwriting, the government plans to create a Fannie Mae-type agency.

With an estimated 17 million unit housing shortage, there is great scope for residential expansion. Still impediments will remain – complex land transfer regulations, the inability to trace many titles and widely deficient utilities infrastructure. Electricity supply, and infrastructure shortcomings in general, also holds back the manufacturing sector.

South Africa has one of the weakest outlooks in the region. Some recovery in household spending is foreseen, however, the hike in personal income taxes, low employment growth, high interest rates, a large personal debt overhang, and high services costs will leave consumer spending gains below previous upturns.
A move toward fiscal consolidation, by reining in the escalating public sector wage bill, will also pose a drag on growth prospects.

Structural barriers, of which reliable electricity supply is the most pressing, will weigh down growth drivers, such as an improvement in some major export markets (particularly the European Union). Furthermore, confidence levels in the private sector will remain weak as disruptive labour-strike actions continue.

Developments in natural resources prices will dominate the outlook for sub-Saharan Africa, as exports of primary commodities average more than 90% of total exports across the region. However, public and private investment, especially in infrastructure, provides significant opportunities for construction.