EU set to loosen its Belt

The European Union (EU) has announced a multi-billion-euro plan to support construction and climate projects, in what is being seen as an alternative to China’s Belt and Road Initiative.

The Global Gateway plan, to be published this week, will reveal a €300 billion investment fund, to be rolled out between now and 2027.

Ahead of the plan’s publication, the EC said “The EU will offer its financing under fair and favourable terms in order to limit the risk of debt distress.”

The money to support the plan is expected to come from the governments of member states, the EU’s financial institutions, development banks and the private sector.

“Without proper transparency, good governance and high standards,” said the Commission, “projects can be badly chosen or designed, left incomplete or be used to fuel corruption. This not only stunts growth and deprives local communities but it ultimately creates dependencies, which can limit countries’ ability to make decisions.”

In a preview document to the Global Gateway, the Commission stressed that it would invest in countries in a way that would not engender dependence. Calling the plan “democratic” the EC stressed that it aims “to forge links and not create dependencies”.

Instead, it said, it aims to strengthen Europe’s supply chains, the weakness of which have been exposed in recent months.

While the EU’s preview makes no mention of China, Michael Clauss, Germany’s ambassador to the EU, said, “Global Gateway has the potential to turn the EU into a more effective geopolitical player. For many partner countries, the offer of a rules-and values-based cooperation at eye level will be an attractive alternative to the Chinese Belt and Road initiative.”

China tightens Belt and Road financing
Projects in Africa particularly impacted by lack of credit, according to report from Reuters 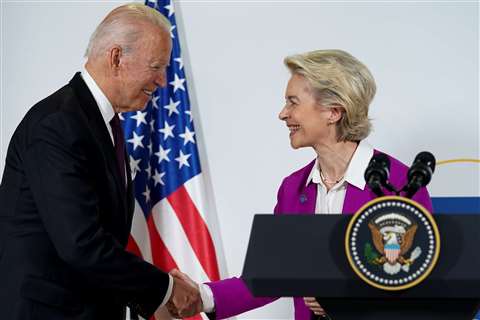 US and EU end steel tariff dispute
EU and US end clash over steel and aluminium, take aim at China’s ‘dirty’ steel