Worldwide sales of crawler, mini and wheeled excavators were at a relative low of some 370,000 units in 2016. However, this still translated to retail sales of almost US$36 billion, according to Off-Highway Research’s new report, The Global Hydraulic Excavator Industry. 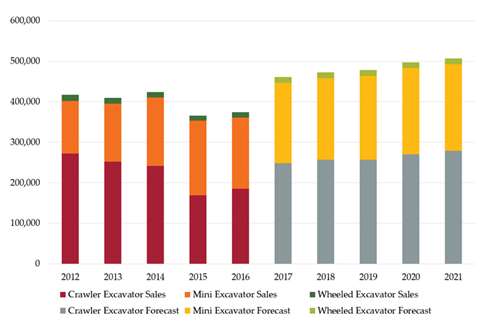 The market is set to jump 24 per cent to almost 461,000 units this year, thanks to robust growth in Asia. Excavators sales in China are set to more than double in 2017 from the low of 2016, while demand in India will see its third consecutive year of robust growth. Meanwhile the Japanese market is expected to see a small increase in sales, following a relatively weak year in 2016.

Elsewhere in the world, the European excavator market is relatively flat this year following three years of good growth. Meanwhile in North American there should be an improvement in excavator sales this year, following stagnation in 2016. Demand in the rest of the world is expected to see double-digit growth in sales in 2017, following two weak years in 2015 and 2016.

Worldwide crawler, mini and wheeled excavator sales are expected to see four years of more moderate growth from 2018-2021, and this will see demand rise to more than 500,000 units by the end of the forecast period – a 34% increase on 2016. This will give the market a value of almost US$49 billion in today’s terms.

Off-Highway Research’s 384-page study on the global hydraulic excavator industry is available from www.offhighway-store.com. Click here to go straight to the report.