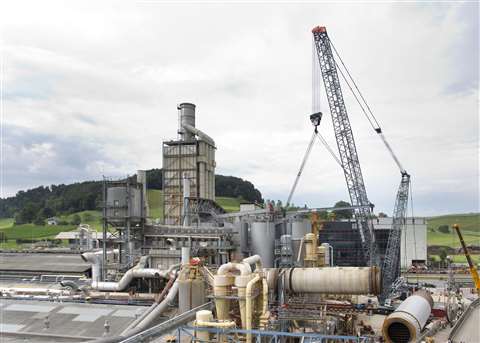 Liebherr's LR-1750-2 is working for Fanger in Switzerland

With its purchase of a new 750 tonne class crawler crane from Liebherr, Fanger Kran AG opened a new chapter in the history of lifting equipment stationed in Switzerland.

The first job awaiting the Liebherr LR 1750/2 lattice boom crawler crane was a demanding one near Lucerne. The crane had to handle a gross load of around 270 tonnes to replace a 30 metre cylinder. In a constricted space in the production plant of a manufacturer of wooden materials, the job was only possible by moving the crane while it held the load.

The Fanger team, led by project manager Josef Waser, was confronted with a tricky task for the crane‘s first job. An enormous cylinder in the production plant had to be replaced in difficult conditions and under time pressure.

Production had to be stopped for the duration of the work so, for the customer, it was extremely important to have the job completed quickly and smoothly. This was also the reason that crane driver Tony Burch had a service technician from Liebherr available for assembling the new crane and throughout the completion of the job.

The crane was fitted with 575 tonnes of ballast both for this job and for the installation of the new component two days later. The suspended ballast on the derrick boom alone weighed 360 tonnes, which is close to maximum.

Over the next few years, the main area for use of the crane in its silver-grey livery will be hoisting work for bridge construction projects.

Since the end of 2015, Liebherr has been marketing an improved version of its LR 1750. The most obvious change is the significantly extended derrick boom which now measures 38 m. The larger pivot section on the LR 1750/2 achieves lifting capacity increases of up to 30 percent in some set-up configurations when operating the main boom, Liebherr said.