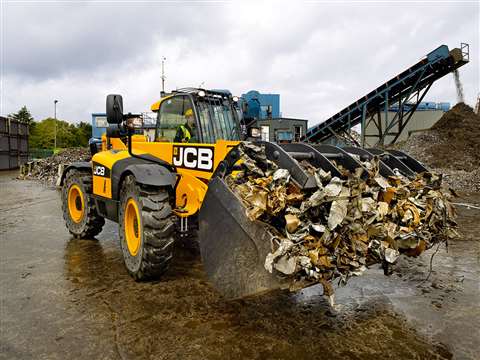 There have been some interesting developments in the telehandler market this year that indicate that these machines are becoming more important for rental companies around the world, particularly in the North American and European markets.

Evidence from Europe also suggests that rental companies are increasingly turning their attention to these products – Finland-headquartered Ramirent, for instance, acquired telehandler business of Kurko-Koponen Companies earlier in the year.

And a flurry of UK-based rental companies have been investing large amounts expanding their fleets – Chippindale Plant bought 50 JCB Loadall telehandlers so far this year, while Fork Rent has added 35 new Manitou MT625s to its fleet.

It is not surprising, then, that signs also point to manufacturers focussing on the rental industry, with a handful of new models specifically being marketed at this sector. Producers are making a big play of the robust construction and straightforward service and maintenance requirements of these rental market models.

The machines boast 74 kW EU Stage IIIB-compliant engines equipped with a maintenance-free diesel oxidation catalyst, and for regions where the DOC is not used, the engine meets EU Stage IIIA standards.

Caterpillar said its UK dealer Finning recently sold €30 million worth of telehandlers – a total of 436 TH414C, TH337C and TH417C machines – to rental company Hewden in the largest single order of building construction products that Finning had ever completed.

“These products are in high demand from customers and form part of our core fleet proposition,” said Kevin Parkes, Hewden CEO. “Our investment will ensure that we are able to say yes to even more hires, and satisfy even more customers.”

Brian Boeckman, JLG Industries global product director – telehandlers, said the machines were designed for the rental market by the rental market. “Operators will immediately appreciate the machines’ simple, comfortable cab, which includes single joystick controls, enhanced visibility from the cabin, and a mechanical suspension seat – all for enhanced comfort and productivity.”

The Tier 4 Final-compliant JLG 3614RS and 4017RS telehandlers are also said to have straightforward service and maintenance requirements; the cab can be cleaned by a pressure-washer before the machine is rented to another customer, while access to the external telescope cylinder and electronics located outside rather than inside the boom.

“The market is mainly for construction, including contractors and rental. Rental activity is very strong in the Middle East and this year we will sell 20% from our target to rental companies and in 2015, we should reach 30% of our sales to the rental market.”

Xavier Larroque, Bobcat business line director for telescopic handlers, said the manufacturer was working on a new 3.6 tonne capacity telehandler with a lift height close to 12 m to be launched at the end of the year.

“This machine will replace a current model and offers a better capacity,” he said, adding, “Our biggest market for highest capacity machines are Western Europe mainly to rental companies. The second largest is the Middle East where the bigger capacity is required for construction, and in Africa for some mining applications.

“Regarding design, we have been working on increase loading capacity without increasing machine weight in order to keep best manoeuvrability and easy and efficient transport. For this we are using Bobcat design knowledge to offer the best ratio between machine weight and capacity.”

Staying on the high capacity side of the market, there have been several other heavy duty introductions – JCB, for instance, has launched the 6 tonne lifting capacity 560-80, and has also presented an engine upgrade for the 4 tonne maximum lifting capacity 540-200.

The new US Tier 4 Interim/EU Stage IIIB-compliant 560-80 is targeted at industrial lifting applications, with a maximum lift height of 8.1 m. JCB is also offering a new 5 m3 bucket specifically for use in low density bulk handling duties.

Meanwhile, the 540-200 boasts a new US Tier 4 Interim/EU Stage IIIB driveline. This is a 20 m lifting height machine that also features a five-section telescopic boom designed with construction use in mind. JCB said the five-section boom minimised the overall length of the machine, with the same wheelbase as the smaller 17 m machine, allowing excellent manoeuvrability in tight site conditions.

Another new high capacity telehandler was launched this year by Manitou in the form of the MHT 1490, which is geared toward the North American oil, gas and bridge sectors. It features a lifting height of 46 ft (14 m) and a 20000 lbs (9.1 tonne) lifting capacity and boasts a Tier 4 Final engine. And IRN was aware of rumours of a much larger capacity machine under development as it went to press.

Magni – a new manufacturer on the scene –has also launched the 23 m reach RTH 5.23, which has a 5 tonne lifting capacity. Developed with European rental companies in mind, the machine is mounted on a smaller chassis than its standard counterpart and features pivoting outriggers instead of telescopic versions.

These changes are said to result in the RTH 5.23 Smart being a more compact machine with a simple and fast stabilisation system – making it well-suited to the rental industry.

The RTH 5.23 Smart joins a nine-model telehandler range that was launched at the Bauma 2013 construction equipment exhibition.

The manufacturer said these very large models were suitable for rental fleets since the interface with the operator is an interactive touch screen. It said this technology was very intuitive and user-friendly.

Meanwhile, on the super compact end of the size scale, Wacker Neuson has launched two new models, one of which it claimed was, “the smallest model on the market”.

This is the TH408 ‘mini telehandler’, which has a maximum 4.1 m lifting height and can carry a maximum payload of 800kg. It boasts compact dimensions at 1.4 m wide and 1.9 m tall, with cabin.

Wacker Neuson said the TH408 had an inside turning radius of 595 mm, making it well-suited to work in confined spaces such as in warehouses or in greenhouses. It said the TH408 could also be transported on a trailer – its operating weight is 2.27 t.

The larger new TH522 model has an operating weight of 4.2 t and has a maximum lifting height of 5.5 m.

To protect the operator and the machine, the manufacturer said all of its telehandlers were also fitted with Vertical Lift System overload protection technology.

It’s clear that the requirements of the rental industry are increasingly informing the designs of many of the latest telescopic handlers on the market, and it will certainly be interesting to see how this trend develops in the coming year.

This is a feature from the September/October issue of IRN. For the full feature, including extra images and box stories, subscribe to the magazine.