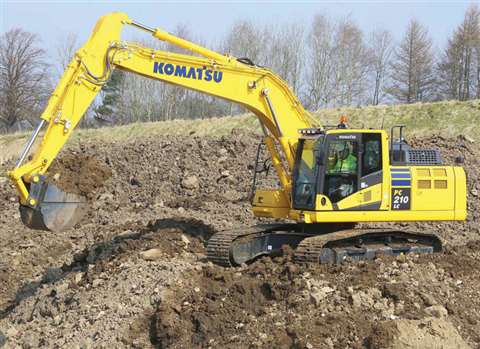 The Stage IV (Europe), Tier 4 Final (US) and Tier 4B (Japan) regulations on exhaust emissions for off-highway equipment diesel engines have been in place for some time. However, it is only now that the final models are being introduced. Many manufacturers have taken advantage of the various flexibility provisions in the legislation, which are designed to smooth the transition and allow ‘old stage’ machines to be sold for a while after the new laws are in place.

With the laws starting to come into force from last year, this transition period is coming to an end. This means increasing numbers of new excavators sold in Europe, Japan and the US now feature the latest low emission engines.

Under the new laws, exhaust streams emit 90% less nitrous oxide (NOx) and particulate matter (PM) than they did under the Tier 1/Stage I laws of the late 1990s. This should cut pollution and improve air quality for society in general, but the technology to achieve this has a cost of course.

The addition of any combination of diesel oxidation catalysts (DOCs) diesel particulate filters (DPFs) and selective catalytic reduction (SCR) in exhaust systems adds to the purchase price of machines. They also have implications for running costs. DPFs have to be emptied or exchanged for new units every few thousand hours, and SCR systems require a urea-based diesel exhaust fluid (DEF) – known as AdBlue in some markets – to operate.

In an attempt to offset these costs for their customers, manufacturers have looked to make their machines more fuel efficient with each subsequent stage of legislation, and this has certainly been the case with Stage IV/Tier 4 Final.

The general aim is to make engines more efficient, which could translate into a smaller, less thirsty engine than previously fitted for any given model, or the same engine running in a more economical state.

A further point in Europe and Japan is that there was no new Stage IV/Tier 4B requirements for engines under 56 kW – they stayed at the Stage IIIB/Tier 4A emissions levels. There has therefore been some incentive to ‘duck’ under the 56 kW barrier where possible, which could apply to excavators as large as about 15 tonnes.

But for larger, mainstream earthmoving excavators, there is no getting away from the Stage IV/Tier 4 Final requirements, and there have been plenty of new launches in the last few months to prove it.

As reported in the April issue of iC, Caterpillar is rolling out a vast number of Stage IV/Tier 4-compliant machines in the first half of this year. In the excavator segment, one of the most interesting is the 336F XE Hybrid, which replaces the 336E H.

This 37 – 39 tonne machine features hydraulic accumulators to capture waste energy, along with other enhancements to the hydraulic system. The design principle is to run the engine at a fixed speed, which is the most fuel-efficient way to use a diesel engine, and use the pump and an adaptive hydraulic valve to manage the hydraulic power and direct it to where it is needed.

A further enhancement, and one which Caterpillar says is an industry first, is the introduction of its Cat Production Measurement payload system, which enables operators to weigh loads on-the-go. This helps ensured trucks are loaded to their optimum and also helps monitor productivity. The system uses sensors in the lift cylinders to calculate the payload, and Cat says this is accurate to +/- 5%.

Komatsu meanwhile has been launching Stage IV excavators at an impressive rate over the last few months, and many of the new models were on show at April’s Intermat exhibition in Paris.

New models to come onto the European market since late last year include the Dash-11 Stage IV PC210LC-11, PC240LC-11, PC290LC/NLC-11, PC360LC_NLC-11 and PC490/LC-11. This means the company pretty much covers all the main sizes of excavator used in construction from just over 20 tonnes up to 50 tonnes.
Also new at the end of last year was the PC228USLC-10, a short-radius crawler excavator weighing up to 24.5 tonnes, which features a Stage IIIB/Tier 4 Interim engine.

Taking the 22 tonne class PC210LC-11 as an example, the excavator is fitted with a 123 kW Komatsu Stage IV engine, which the company syas delivers 6% better fuel efficiency than the predecessor model.

The company added that the PC210LC-11 features a heavy-duty undercarriage which helps deliver a high lift capacity. What’s more, when put in Lift Mode, the hydraulic pressure is raised to increase the lifting force by up to +7%.

Hitachi also had new models on display at Intermat, including the first machine in Europe from its Zaxis-6 range of Stage IV-compliant excavators. The model on display was the 30 tonne class ZX300LC-6.

Hitachi says its new TRIAS II hydraulic technology cuts losses by reducing the amount of hydraulic oil returned to the tank, thanks to cooperative control of the pump and valve. Two solenoid valves have been added to better control the pump flow effectively, lowering fuel consumption, and an auto shutdown feature also prevents fuel wastage.

The engine output of the ZX300LC-6 has been increased to 186 kW, compared to 140 kW for the ZX290LC-5 it replaces, which Hitachi says translates to 14% more productivity in power mode. It added that this means better fuel efficiency, which is to say less fuel burned per tonne of material moved, rather than lower fuel consumption.

HCME General Manager of Engineering Hiroyuki Kamata was involved in the design and testing of the new Hitachi Zaxis-6 excavators. “Our first priority was to ensure that the machine worked properly,” he said, “and the next priorities were the controllability and operating experience. Overall the results were positive in terms of performance. We are confident that Hitachi customers will be happy operating the new Zaxis-6 models.”

Intermat also saw the launch of the first in Hyundai’s range of Stage IV-compliant HX crawler excavators. The 30 tonne HX300 L and 52 tonne HX520 L on show were described as by Hyundai as the most powerful and most ergonomic range of equipment it has ever produced.

Manufactured in Ulasn, South Korea, the machines are said to have been designed from scratch, and Hyundai added that this was why the new ‘HX’ model suffix had been added, to help distinguish them from previous series.

The smaller machine features a Cummins engine, and Hyundai said this EGR and SCR-equipped diesel helped deliver fuel savings of between 3% and 6%. The HX520 L meanwhile is fitted with a 331 kW Scania 13 litre engine.

Further models are due to be added this year and Hyundai says the final series will span the 12.5 to 90 tonne operating weight range.

Doosan meanwhile has been rolling out new Stage IV/Tier 4 Final excavators at quite a pace this year. New models include the 40 – 50 tonne DX420LC-5, DX490LC-5 and DX530LC-5 at the heavier end of the range. These are powered by DC13 engines from Scania, which achieve the Stage IV requirements without the use of a DPF.

Doosan added that these engines offer more torque at lower speeds than previously, so owners should see a fuel saving on the machines, as the engines are run at 1,800 rpm instead of 2,000 on the Stage IIIB models. This delivers about a 5% fuel saving, but the engine in the DX420LC-5, for example, delivers +11% more torque.

Again, Doosan has opted for Scania engines, a 9 litre DC-9 in this case, which delivers 202 kW at 1,800 rpm – a 27% increase on the power of the unit in the LC-3. Despite this up-rating, Doosan says the machine consumes some -10% less fuel than its predecessor.

Meanwhile, the 25 tonne DX255LC-5 crawler excavator is fitted with a 6 litre Scania engine. Doosan has increased the lifting capacity and power of this machine too, while reducing noise compared to its predecessor. It has also managed to reduce fuel consumption by between 4% and 9% compared to the DX255LC-3.

Another key feature is the addition of Doosan’s Cortes dual mode telematics system – dual mode meaning it can communicate with the Internet via either satellite or mobile telephone networks. This is a feature of all Doosan Stage IV excavators above 14 tonnes.

Case has added similarly sized machines to its tracked excavator range this year with the ‘D’ denoting that they are Stage IV/Tier 4 Final machines. Using SCR to achieve compliance with the regulations, Case says its new machines, which include the CX250D, CX300D, CX350D and CX370D from 25 to 40 tonnes, offer 8% better fuel efficiency than their predecessors.

Meanwhile, Case’s parent company, CNH Industrial has redefined the role of sister brand New Holland to scale-back its presence in the construction sector in Europe. For many years, the two companies have had overlapping portfolios of products, but Andy Blandford, vice president for construction equipment in the EMEA (Europe Middle East and Africa) region, said that this had now changed.

He said, “The strategy is that Case has a great product range, from 1 tonne to over 75 tonnes. There is still a New Holland construction brand, but only for compact machines.”

“That said, we have a second brand which is New Holland, and there we’re selling compact products solely through our agricultural equipment network.”

CNH’s former excavator partner, Kobelco, meanwhile is now marketing its excavators worldwide, following the winding-up of the CNH joint venture at the end of 2012.

Intermat saw it unveil its Generation 10 excavators, which feature Stage IV engines. The company said that in heavy mode, the machines are +6.7% more productive than their predecessors for the same amount of fuel burnt. Meanwhile, fuel consumption is reduced in normal and eco modes.

Liebherr meanwhile has taken the wraps off its first Stage IV-compliant excavator, the 40 tonne R 946, which is powered by the company’s own 200 kW six-cylinder SCR engine.

Liebherr puts an emphasis on the excavator’s robust construction, highlighting the X-shaped undercarriage frame, and the use of sensors in the hydraulic system, which analyse loads and use computer control to optimise the engine’s and hydraulic system’s performance.

So while the latest generation of Stage IV /Tier 4 Final excavators may cost more than their predecessors, the major manufacturers are putting an emphasis on improved performance and better fuel efficiency to help offset this.