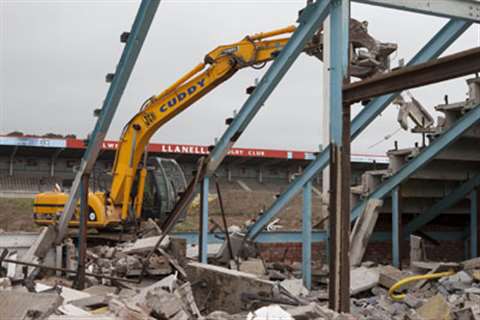 Leading UK contractor Cuddy Group has almost completed a 12-week demolition programme that will see the demise of an historic rugby union ground, Stradey Park, the former home of the Scarlets region and Llanelli RFC, in Carmarthenshire, Wales, and a venue for five Welsh international rugby union matches. The 10,800 capacity stadium opened in 1879 and it saw its last match, an EDF Energy Cup fixture, played there on October 24, 2008.

Cuddy's managing director Mike Cuddy said of the demolition: "There is a lot of nostalgia attached to Stradey Park; it hosted many nail-biting matches in its heyday and I know many fans will be sad to see it finally go. Yet the stadium has been derelict for some time now, so it is important that it is brought down before it poses a safety risk."

Cuddy began soft strip in the stadium in May 2010, with the East Terrace and West stand being subsequently removed. Then Cuddy's 20 and 30 tonne excavators turned their attention to the South stand. The steel frame and asbestos cladding roof of the stand were removed and then the machines cleared the terracing. Cuddy still has the North stand and Tetley Building, with its offices and function rooms, still to clear.

Cuddy expects to recycle 98% of the resulting demolition debris, including the plastic seating and steel frames. A total of 6,000 tonnes of concrete is being crushed on site and used in the redevelopment of the site, which will become a residential site with 355 new houses, as will the topsoil from the pitch.