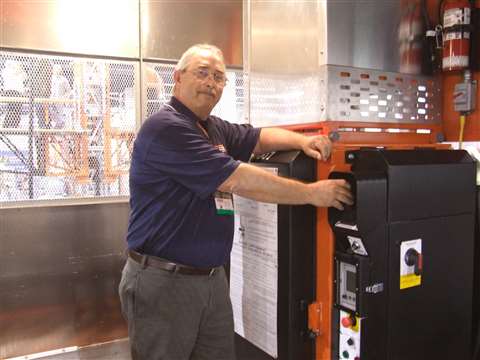 Now you see it, now you don't. Fraco's new Transporter had head's turning at World of Concrete, held at the Las Vegas Convention Center Feb. 3-6, 2009. The unit can transform from a transport platform to a work platform in a matter of hours, not days. "We had a lot of people who wanted to get staff and brick lifted," said Ronald Harris, Fraco's product manager about the unit's versatility.

The Transporter can carry material only or material and personnel. It has a maximum payload, with one cabin, of 8,000 pounds or 20 people, and features lifting speeds of 35 feet per minute. The unit can be used in construction, renovation or industrial markets and, the most cost-saving feature, Harris said, is that the mast sections are interchangeable. "It has a different design," Harris said. "The cabin can be on either side and it can have two cars."

Harris said demand came from when a building had a hoist on one side, it eventually has to be dismantled and taken down so the unfinished side of the building can be completed. "It's a two-week process," he says. The Transporter, which was in development a year before the 2008 World of Concrete show, cuts that weeks-worth of time down to almost nothing. "It only takes three hours to convert the Transporter (from personnel/material hoist to work platform.)"

The Transporter has drop-down ramps and side-loading doors available, a fully enclosed full-size cage, optional wireless floor call stations, a remote control option and is both ANSI and OSHA compliant.