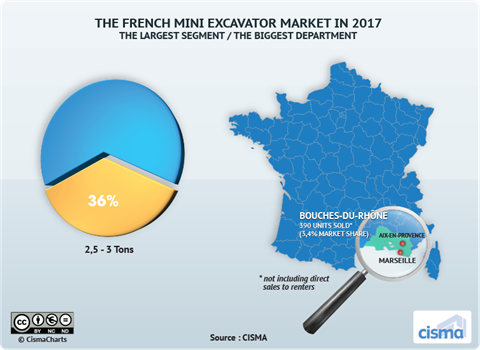 The French mini excavator market grew by 24% in 2017 and, as in 2016, the most important segment was the 2.5 to 3 tonne models, according to figures from CISMA (the French association of manufacturers of construction equipment and material handling technology).

It also found that the region of Bouches-du-Rhône remained the biggest department in terms of units sold.

Mini excavators account for 68% of the total compact equipment market, it said. With 11,574 machines sold in 2017, the French market almost reached its historical peak of 2007, when the figure was 11,676 units.

According to CISMA, these good results were thanks to the rental sector, which was up 34% in 2017 compared to 2016, while the performance was also said to be a result of a rise of 20% attributed to other buyers.

The department of Bouches-du-Rhône in the south east of the country accounted for 3.4% of the total mini excavator market, followed by the department of Rhône, situated around the city of Lyon, at 2.9%.