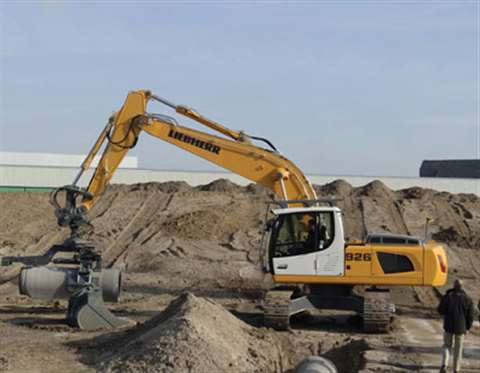 One of Liebherr's latest Generation 6 excavators.

According to Liebherr, the Generation 6 excavator range, "Will set new standards for crawler excavators in the 21 to 28 tonne category." It also said new series, "Will achieve new levels of performance, economy, operating convenience and reliability."

In response to different market requirements each new machine is available in ‘Classic' or ‘Advanced' version. Classic is aimed at typical earthmoving tasks while the Advanced versions have more technology on board and are designed to be more flexible. Liebherr is targeting sectors such as mining, embankment construction, industrial applications and demolition work with these higher spec machines.

All Generation 6 models have the new ‘Positive Control' hydraulic system with two independent circuits and corresponding control system logic. It is designed to cater for demand that includes use of three or more functions simultaneously or partially synchronised.

This means the machines are able to carry out several movements at once, such as grading during travel - either straight ahead or in a curve. The Advanced version's higher operating pressure also increases tractive effort and tearout and breakout power, Liebherr said.

The Advanced excavators feature ‘Positive Control Advanced', a new technology Liebherr has developed to make working with attachments and other non-earthmoving tasks as simple as possible. The technology comprises a series of power management systems and sensors that help match oil pressures and flows for smooth and efficient operation. It also includes the company's LiDat on-board diagnostic system.

Power on all three models is provided by Liebherr's own four-cylinder diesel engines. Outputs are 105 kW in the R 906, 115 kW in the R 916 and 130 kW for the R 926, and all comply with the current Tier 3/Stage IIIA emissions standards. Liebherr has used CAN BUS networks in its engine management systems keep engine speeds steadier, optimise fuel consumption and make more efficient use of the available power.

Higher performance and longer operating life are features of the new undercarriage. It uses an X-pattern construction principle to distribute forces more effectively and prolong working life. A new design of travel gear increases performance in that maximum travel speed is 6.2 km/h, +17% higher than its predecessor, and tractive effort is up by +12%. Part of the new travel gear is a 23-tooth drive sprocket that helps smoothness and high running speed.

All the new excavators have shorter operating cycles, helped by +24% higher slewing speed and +50% more torque, according to the manufacturer. The larger diameter slewing ring distributes incoming forces more effectively to reduce stresses and extend operating life. Improved noise insulation and better access for maintenance are other features of the new structure.

Operators will appreciate the brand new cabs on the Generation 6 machines. An air suspension seat is standard, and the adjustable controls move with the seat to help operators find the most comfortable working position. A 7-inch (180 mm) touch screen is used to control many functions and for diagnostics, and the unit is also video-compatible.

Outside the cab, boom hoses have been relocated to give a better view around the boom, and xenon work lights are available as an option.