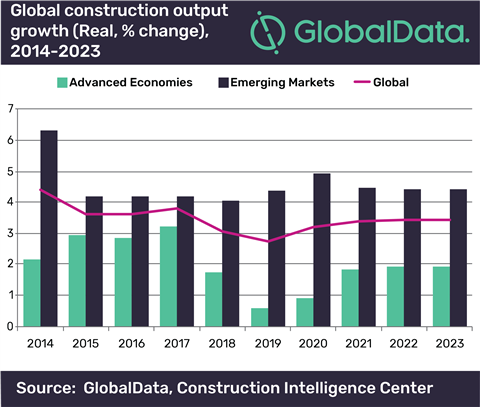 Global construction output is predicted to be 2.7% in 2019

The forecast for global construction output growth in 2019 has been revised down to 2.7%, the slowest pace of growth in a decade, according to GlobalData.

The growth figure has been revised downwards due to a drop across emerging markets and in the US and the Middle East.

However, GlobalData’s forecast sees global construction output growth increase to 3.2% in 2020 and then stabilise at 3.4% over the remainder of the forecast period, which runs to 2023.

Danny Richards, lead economist at GlobalData, said, “Some major advanced economies have struggled to generate growth momentum, including the US, the UK and Australia.

“In China, where the authorities are stepping up investment in infrastructure to prevent a continued slowdown, growth will remain positive, contributing to a slight acceleration in growth in total output in the emerging markets.

“Geopolitical risks are intensifying, which could potentially undermine investor confidence and disrupt capital flows in the early part of the forecast period.”

The report mentions how political uncertainties are not helping the growth of the global construction industry, with the trade war between US and China and the recent drone strikes on Saudi Arabia’s largest oil processing facility highlighted.