Gone with the wind: turbine transport 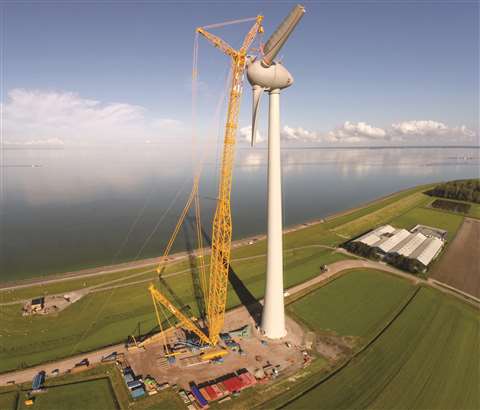 Larger components requires a rethink on transport and design

The size of components both for onshore and offshore wind farms are increasing, creating very different challenges for the companies tasked with transporting them. CHRISTIAN SHELTON reports.

As more governments around the world look to alternative forms of energy production to help address climate change, the wind power sector is booming, both onshore and offshore. The two environments, however, are very different propositions for companies tasked with transporting the various wind turbine components as efficiently and economically as possible.

According to Peter Libert, area sales manager at international heavy transport and lifting specialist Sarens, “Onshore wind power transport has existed for around the last 30 years and is a relatively stable industry.” This is reflected in the wide range of specialist equipment that manufacturers have developed to serve this sector. For example, German heavy-duty road haulage and oversized cargo transportation specialist Goldhofer Aktiengesellschaft (Goldhofer) makes an arsenal of specialist machinery designed specifically to transport each element of a wind turbine. This includes: its FTV 300 rotor blade transport device for the transportation of rotor blades; its Super Lift fourfold extendable flatbed semitrailer for transporting long rotor blades; its RA4 tower adapter for transporting heavy tower sections (up to 180 tonnes); a range of low loaders with various axle systems for transporting nacelles; and a range of drop-deck vehicles for transporting turbine hubs designed to comply with regulations for maximum load height (which is 4.2 metres in most countries).

Goldhofer is not the only heavy transport equipment manufacturer to have such an extensive range. For example, another German company, Scheuerle Fahrzeugfabrik (Scheuerle), along with its Tii Group partner companies Nicolas, Kamag and Tiiger, offer a portfolio that incorporates: tower adapters and supporting tips for wind tower transport; telescopic trailers for rotor blade transport; and modular self-propelled or towed platform trailers for the transportation of nacelles.

Most recently it was Scheurle SPMT that made the headlines with a high-profile job in Saudi Arabia – moving three 58-m-long rotor blades for the Gulf Haulage Heavy Lift Company (GHHL) using 36 SPMT axle lines. According to Scheuerle, GHHL opted to use the SPMT because of their manoeuvrability, as the route to the installation site passed through an oil refinery which required careful negotiation. Scheuerle claims its comprehensive range of electronic SPMT steering programs made this possible. The company says it expects to transport more rotor blades for GHHL as, by 2023, Saudi Arabia aims to produce 9,500 megawatts of wind and solar power.

Canadian specialized semi-trailer manufacturer, Temisko, has just developed a new blade trailer that it claims “was created with growth in mind”. Temisko says it can transport the current blade sizes of 62 metres (203 ft); however, the trailer has been designed to be easily upgraded to accommodate longer blades with the addition of a fifth beam – which extends the trailer’s length to 218 ft (66 m). Even with the fifth beam added the trailer can close up to a length of 53 ft (16 m). The blade trailer also has a steering angle up to 46 degrees.

The reason why Temisko has designed such a trailer is in response to the ever-growing size of wind turbines. And, on land, this is increase in size is starting to cause problems as Sander Splinter, managing director of heavy lift specialist Mammoet Europe and president of ESTA’s crane section, explains, “Safety during the transportation and erection of on-shore wind turbines is a growing concern. Quite simply, there are too many accidents and near misses. There have long been problems with poor quality access roads and hardstands on site but these issues are becoming more pressing as we see the development of bigger wind turbines. What is more, the increasing hub heights require longer and longer crane booms. And longer booms have limited workability in windy conditions.” As a result, the International Crane Stakeholder Alliance (ICSA) - whose members include ESTA, FEM, AEM, CICA and the SC&RA - has created a new working group which is expected to discuss the issue further at the World Crane and Transport Summit in Amsterdam in November. “By all of us agreeing and adhering to a uniform set of standards we should be able to improve safety significantly,” Splinter urges.

The offshore environment, due to its intrinsic nature, does not suffer with the same restrictions or problems imposed by the infrastructure found onshore and the trend both towards bigger turbines and bigger wind farms continues unabated. “Many wind turbine factories are located near harbours or quays so the wind turbine’s dimensions are potentially unlimited,” qualifies Libert. “This is the evolution you have seen over the last ten years. And it will continue like this for the next ten years, with bigger dimensions and heavier weights.”

As offshore wind farms can be located away from where people live, even out of sight from land, the turbines also tend to be much greater in number than their land-based brethren. This significance of this? Well, it is all about logistics, as Libert explains: “Logistics is key in order to successfully transport all the components for offshore wind farms - particularly organising everything so that it arrives at the right time. Any inefficiencies in the logistics process (assembling, storing and loading the wind power components) becomes multiplied by the number of turbines. This can make a big difference between profit or loss on your project.” This is because production is slower than installation, so the entire process needs to be carefully controlled, Libert stresses.

“The heaviest monopile so far has a weight of 1300 tons,” Libert says, “and monopile production companies tell us that soon they will weigh in excess of 2500 tonnes.” Sarens says this is not a problem for it, as it is experienced in lifting and moving even heavier weights in the past for the nuclear, oil and gas industries using a combination of SPMTs and cranes. It does, however, illustrate the unrestrained nature of offshore wind power.

Just how far this evolution will continue remains to be seen, yet one thing is certain: companies involved in all aspects of heavy transport will continue to innovate and adapt to meet the challenges ahead.